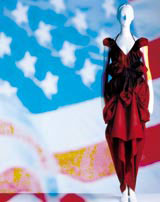 As the National Design Triennial exhibition opens its doors in New York, Peter Hall assesses the state of American design

The identity crisis that used to permeate the ornate interiors of the Cooper Hewitt National Design Museum in New York seems to have vanished with the arrival of director Paul Thompson, former head of London’s Design Museum.

This might have as much to do with the zeitgeist as with Thompson’s leadership. The museum’s second triennial review of contemporary design in the US, called Inside Design Now, provides proof that the era of austere aesthetics and minimalist Modernism has expired.

As the show’s co-curator Donald Albrecht puts it, in a timely riposte of Adolf Loos, ‘No longer is ornament a crime. Today’s designers are embracing decoration, but refracting it through the lens of Modernism.’

Three years ago, as Thompson was arriving, the first triennial’s high-tech objects and blobular furniture seemed at odds with the interiors of the museum’s 19th century mansion home. In this year’s triennial, however, technology isn’t embarassed by its context; it embraces it.

The spiritual centrepiece of the show is Cherry Blossoms, an interactive installation, by Antenna Design. The group installed a curving screen under the chandelier in the carved wood stairwell. As visitors use the stairs they are followed by projections of animated cherry blossoms with accompanying tinkling sounds. Electronic flora and the carved fleur-de-lys of the creaking staircase sit in happy harmony.

Many reasons could be forwarded for the reappraisal of design as a decorative art, albeit of a technologically enabled sort. Amid recession, terrorist attacks and war, the US population retreated into the home. Its focus shifted inward, and craft skills were re-evaluated, notably in the hands of designers seeking an escape from the tropes of off-the-shelf software.

Thompson identifies the interior as the predominant theme of Inside Design Now, arguing in his introduction to the show catalogue that ‘an interior can be as private as a bedroom or as public as a subway car.’ He adds, ‘As cultures become increasingly global and nomadic, new technologies and social shifts are changing our understanding of interior spaces.’

This expansive definition of the interior is most provocatively illustrated by sculptor Michael Rakowitz’s Parasite project, which provides individual homeless shelters in Boston and New York that double as a form of what Rakowitz calls ‘cultural agitation.’ His $5 (about £3) tents, made of double-thickness garbage bags, are inflated and heated by a network of tubes connected to the steam vents and air ducts of city buildings.

Media reports might have us believe that the American nesting instinct reaches its illogical extreme in the form of a HumVee, where citizens of the land of the free can happily guzzle all the gas they need (at 11 miles to the gallon), safely shielded from the angry world outside. But Inside Design Now offers more heartening alternatives for the wheeled dwelling. Architect Jennifer Siegal’s elegant, lightweight, mobile structures include a library that can be towed by motorscooter, a community-based ‘ecolab’ and a portable home.

The shelter theme is stretched still further with a project by architecture group KW:A, which with its (A)Way Station exhibition-within-the-exhibition, interprets the dwelling spaces of migrants as a series of plywood boxes. Within these crates household items, such as drawers, chairs, plates and shoes, are embedded – encased like insects in back-lit translucent resin. This is about as far from the 2000 triennial as it gets, the gadgets and goodies replaced by cerebral think-pieces on population movement and the resulting redefinition of home.

That is not to say that Inside Design Now plays out the interiority theme with exhaustive rigour. The four curators who picked the work in the show were obliged to recognise the triennial’s mission to show ‘new ideas and future horizons across the field of current practice’ as the museum blurb puts it, and threw in a wide sweep of designerly staples, from typefaces to trains, and lighting to logos as well as more unlikely projects like an artificial heart, collection of smells and even a theory of the universe. To some visitors, it might resemble an art-meets-science bric-a-brac collection, not so much revealing what designers do as raising the question: What is design anyway?

To those who cling to disciplinary boundaries and a favoured canon of practitioners, such a wild melÃ©e indeed poses a problem. The New York Times’ architecture critic Herbert Muschamp argued that ‘the curators have cast their nets so wide that the catch ceases to resemble design per se. Rather, it has drawn forth too many visual by-products of other enterprises.’

But design has always been dependent on other enterprises; packaging, television identities, automotive styling and exhibition design each depend on other industries and fields of expertise; in this sense design is parasitical.

More to the point, as the disciplines increasingly converge, it becomes rather difficult to imagine what design per se actually is. Architects produce art, industrial designers produce electronic interfaces and graphic designers write books.

Best-selling author, publisher, retailer and self-taught graphic designer Dave Eggers presents a pleasing example of this professional convergence. The triennial features a selection of Eggers’ McSweeney’s publications, which derive their visual forms from the quirky old-school bookishness embraced by the publisher in cohesive objects.

Eggers’ novel You Shall Know Our Velocity, for example, comes in a hardback edition with no introductory rituals whatsoever; the narrator wastes no time with pictures and begins telling his sensational-sounding story on the cover: ‘Everything within takes place after Jack died and before my mom and I drowned in a burning ferry in the cool tannin-tinted Guaviare river’. As curator Ellen Lupton writes in her introduction, ‘the author isn’t dead, he has just learned how to set type’.

The only problem with such broad definitions of design as embraced by the curators is how to make the resulting collection seem less scattershot and arbitrary. As Paul Elliman seemed to be saying with his strategic display of the covers of two unrelated journals Everything and Anything, both published in the same year featuring Elliman’s Bits typeface, just about anything and everything is design.

At certain moments in the triennial, however, the combination of certain exhibits succeeded in suspending my disbelief long enough for it all to make sense. In adjacent rooms are Tod Machover’s squashy electronic music making balls, Bureau Betak’s black mesh box filled with the sound of heavy breathing and small TV monitors showing the group’s epic theatrical catwalk productions, and Cynthia Breazear’s creepy, interactive mechanical flowers writhing on a bed of shredded steel. After that sensory onslaught, the next room, with no sound, motion or smells was dullorama.

But if the curators of the next triennial concentrated on extending the visceral show, taking a theme and running with it, then any obligations to dutifully represent the work of the design community would be rendered irrelevant. We wouldn’t even care what design is; we’d just know we liked it.