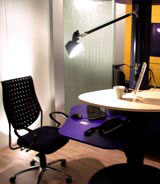 Progressive office design is nothing new. Five years ago you couldn’t move for Feng Shui consultants, while the rise of digital media workspaces have been marked by the obligatory specification of a table football table. With such gestures, a more practical approach to improving workers’ lives has emerged – the product of a century of research into the subject.

In the 1920s, American electrical company Hawthorn set up an experiment to show that improving the physical environment of the workplace would lead to greater output. The findings, since referred to as the Hawthorn Effect, concluded that making people feel cared for ultimately took precedence over improvements to their physical environment.

The reasons behind providing better office surroundings are not generally altruistic, but since it has been proven that addressing the psychological needs of the workforce will increase productivity and reduce turnover, good design makes good business sense. Well-designed buildings also offer the advantage of reduced running costs, satisfying both environmental and financial concerns.

As such, the answers to improving the workplace lie not in simply providing the scientifically calculated ‘perfect’ temperature or optimum light levels, but instead in recognising more subtle needs. An increasingly sensitive attitude to building services and a careful specification of materials might be more straightforward than the ubiquitous fish-tank-in-reception, but such concerns can contribute lasting benefits and help to create a more comfortable environment.

Architect Frank Duffy is chairman of DEGW, which specialises in researching, designing and testing strategic office concepts. He believes that communicating a sense of personal empowerment to the worker is key to providing comfort for modern office users, and pinpoints the importance of choice as a critical factor in designing a better work environment. ‘If an organisation wants to be more open and responsive, it can say that with an appropriate physical environment – or it can just as easily provide an environment that creates divisions and opacity and sends people low frequency messages that say “you don’t matter” every second of the day,’ he says.

Arguably, the most significant trend in the modern workplace has been the growing shift from cellular to open plan offices, a phenomenon that has brought a unique set of design challenges. Ensuring the workforce still feels ‘cared for’ while allowing for mass occupancy is a complicated feat. Individuals are instinctively apprehensive of open plan interiors and harbour negative associations of increased noise, reduced privacy and personal control. Simple solutions, such as etching patterns on to glass partitions, can counter the goldfish-bowl effect of feeling scrutinised, without sacrificing precious light, and careful use of colour helps create focus points and humanise the office. Adding features such as a coffee machine or group seating area also breaks up the floor and compensates for the perceived losses of a stripped down, open plan space.

Inevitably, though, there will still be conflicts between workers with different needs being forced to share the same light levels and air temperature. As such, the rise of large open plan offices has removed the possibility for true autonomy, and often it is only the illusion of choice that is on offer.

Chris Wise, co-founder of Expedition Engineering, was formerly a director at Ove Arup and Partners, now Arup, where he lent his skills to Foster and Partners’ Commerzbank in Frankfurt. Hailed as the world’s first Green skyscraper when it was completed in 1997, the building provides natural ventilation and daylight to all its occupants, but ultimately relies on a macro-level building management system that overrides any personal decisions, such as whether a window can be opened or closed. ‘When temperatures rise or drop beyond certain levels, the facade responds by shutting down,’ he explains. ‘While it is important to give people the impression that they can do something about their office environment because it makes them feel better, in reality, with any large commercial building, personal control will always be limited.’

A brave new response to this problem is being researched by engineers who hope to unify building services and furniture design to create a workstation that provides its user with their own personally controlled micro climate. The concept has been on the drawing board since the 1970s, but those involved believe the technology now exists that will enable the product to take shape. Although prototypes are still at an early, crude stage of development, they will rely on software packages that predict local comfort levels and include personal settings to allow users to control their air quality, temperature and light levels.

Engineer Alistair Guthrie, a director at Arup, is developing the idea. ‘The buildings that are most popular are those where the users can control their own environment,’ he insists. ‘When you are at a certain desk, you may want a particular environment – this solution falls in line perfectly with the new ideas about the way work is being configured. The real issue is finding a way to improve comfort levels and configure it to use less energy.’ While the closest analogy to date is the aeroplane seat, there are no signs that those working on the concept will include controls for a personal entertainment system or refreshments on demand.

Although hot-desking is still a relatively rare phenomenon, the advent of wireless technology has ensured that today’s workforce enjoys greater mobility than ever before, and is no longer tied to an allocated workstation to perform daily tasks. Since work in a modern office involves a mix of group interactivity and more individually focused tasks, the need for both social and quiet spaces is now being recognised by designers. A refectory, cafÃ© or chillout area can function as an important escape.

Such a novel alternative to the traditional meeting room cannot be without teething problems, and a relaxed working environment only functions successfully when used correctly. Touch downs – breakfast bars intended for perching at for short bursts – can provoke backache when used by workers all day long. Similarly, the recent trend of setting all office furniture on wheels gives little more than an illusion of flexibility and looks rather messy. While soft seating areas can also fall flat. ‘I’ve seen people struggling to have a meeting while e e sitting next to someone on a squishy sofa,’ laughs DEGW’s Adrian Bell. ‘It looks lovely in the brochure and is fine for a chillout room, but otherwise it’s not very practical.’ Thankfully office furniture manufacturers have woken up to the needs of a changing workforce, and now provide a dazzling array of products that are designed for the rigours of commercial interiors without being too corporate or grey.

Beyond furnishings, the very fabric of the modern office building can conspire against its users: lightweight glass and steel confections may be de rigueur for the contemporary workplace, but these highly reflective and thermally conductive surfaces are best tempered by more massive materials, such as concrete and timber, which are slower to respond to temperature fluctuations, creating a more stable, comfortable environment. Flooring is an important consideration, and while the ability to withstand wear and tear takes precedence, the glues, backings and synthetic fibres found in many contract carpet tiles, can emit static and result in a very uncomfortable feel. People are instinctively comfortable with timber, responding to the material on different levels, rather than simply for the way it looks. As such, faking it with a wood-effect vinyl laminate will not contribute the same positive effect, however visually convincing the finish.

Although natural materials are considered best, they are often treated with invisible varnishes, solvents, finishes and sealants that can give off harmful volatile organic compounds that slowly leach into the air and have been found to contribute to Sick Building Syndrome. There is no single definition of SBS: it is simply manifested by a large number of a building’s occupants falling sick due to a variety of factors. Since there is no agreement on the criteria which discriminate between ‘sick’ and ‘healthy’ buildings, the term is often treated with suspicion. But given that the House of Commons Select Committee on Environment Health Hazards has calculated the cost of SBS to the British economy at over £600m per year, it cannot be dismissed lightly.

Recent research by US space agency Nasa has suggested that plants can substantially reduce the level of exposure to VOCs, improving the indoor air quality in a building and claiming that, together with increased ventilation, plants can help minimise and perhaps clean up incidences of SBS. Designing the problems out through good specification can help ensure a more ecologically friendly workplace. With this in mind, the UK’s Building Research Establishment has launched Envest, a software tool for designers that aims to take the headache out of the process of assessing and comparing the environmental impacts of different materials.

But, perhaps real improvements will only come with a more radical reinterpretation of the way we work. Wise predicts the function of the workplace is destined to change ‘from a building where people are plugged into their desks like battery chickens, to a forum where you meet up to discuss issues that really matter – true comfort will come the day you no longer have to go to the office at all’.

Switching yourself on to the warning signs