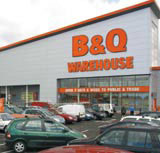 In a bid to breathe new life into its troubled DIY retail chain, the board of B&Q is now sounding out designers, with project appointments expected imminently.

Design consultancies are being lined up by B&Q as it continues to search for retail strategies to revitalise the ailing profits announced in first half results last week.

A series of meetings with design groups – both on and off of the B&Q roster – is underway, with discussions taking in all elements of the retailer’s business, including store formats, point-of-sale materials and packaging designs. They are being conducted at board level and the selection of design groups is anticipated in the coming weeks.

The moves come at a difficult time for B&Q. Its parent company Kingfisher last week posted a 12.8 per cent decline in pre-tax profits. It has also effectively axed 400 jobs across B&Q, around 220 of which are drawn from its head office in Southampton (DW 15 September). This affects the marketing and design buying departments, although the company declines to reveal a departmental breakdown of job losses.

Kingfisher described trading conditions in the UK as the ‘toughest in many years’, affecting sales of B&Q’s ‘higher ticket’ products such as kitchens, bathrooms and bedrooms.

B&Q is trialling store formats which move away from its traditional ‘nuts and bolts’ DIY basics, moving toward softer furnishings and an increase in showroom-style room presentations, says a Kingfisher spokesman. The latest manifestation of this format will open in Luton in March next year, allocating more space for room sets and including a centrally located café. This format is designed internally, says a spokeswoman for B&Q.

The retailer’s design roster includes Elmwood and Big Idea Brand Management, although the spokeswoman declined to reveal details of the full list, which is thought to contain at least two further consultancies.

A source close to the consultations with designers says that in the light of poor trading figures, B&Q is now looking at all areas of its business, including design, advertising, public relations and direct marketing.