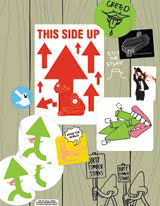 As credentials go, they don’t get much cooler than Geoff McFetridge’s. A graphic design graduate of California Institute of the Arts, one-time skateboard designer, art editor of the seminal Beastie Boys magazine Grand Royal, title designer for the short-lived but brilliant cult series Freaks and Geeks as well as achingly hip films such as Virgin Suicides and Adaptation, designer of prints for fashion designer Marc Jacobs, video director for Simian and The Avalanches, a solo show at Paris shop and gallery Colette, watch designer for Nike, skateboarder, co-founder of the Directors Bureau (home to Mike Mills, Sofia Coppola and Shynola) … and the list goes on. This is one Canadian design dude that you suspect Matt Parker and Trey Stone wouldn’t want to put down in South Park. So a huge thanks must go to Kemistry and Onedotzero for bringing the work of this design master to the UK for his first solo show. And what work it is. Collected here, McFetridge’s multi-award-winning films, ads, videos and wall-based work show a skilled and flowing style that is technically and technologically knowing and forward-thinking, but never leaves behind the role of the hand, the presence of the viewer and the wit of a knowing audience. Ever-present is sketching, doodling, comics-based illustration and hand-rendered typography, all interacting with, challenging and constantly engaging the viewer. Miss it at your peril. Collected Works: Geoff McFetridge runs from 20 September to 30 October at Kemistry Gallery, 43 Charlotte Street, London EC2

Homage to the Routemaster

Designers on Harry and Meghan’s 'royal' ban: “Rarely has a brand launch been so highly anticipated”

Prince Harry and Meghan Markle may not be using their ‘Sussex Royal’ in future branding, following news that they will become independent from the royal family. The name is currently