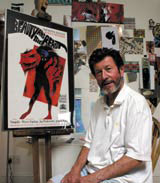 Jan Pienkowski’s silhouettes are the perfect accompaniment to dark fairy tales, sucking readers into a world that is as forbidding as it is enticing. Yolanda Zappaterra tracks him down for a bedtime story

ILLUSTRATOR Jan Pienkowski’s house is literally made of his work. From a front door set with Pienkowski-designed oak tree glass panels, and a hall decorated in Pienkowski-designed wallpaper, that looks as if William Morris has tried his hand at Pop Art, the home is a delightful extension of the man who gave us the seminal and still magical pop-up book Haunted House, and almost 40 years of brilliant cut-out and silhouette illustrations. Always popular with kids, the work is now all the rage for grown-ups too. It’s the bathroom walls, clad entirely in non-matching ceramic tiles, that offer real insight into the man. Lovingly collected, these tiles – hundreds of them – were painstakingly and carefully assembled out on the lawn to ensure the mixes worked before being transposed to their intended space. This willingness to spend however long it takes getting something right and, years later, the obvious pleasure still derive from having done it, is what informs and drives Pienkowski’s work and world.

Pienkowski’s childhood was spent in Warsaw, Bavaria and Italy, before he settled in England at the age of ten. His early years were filled with art, bookmaking, and trips to the forest, which inspired the constant return to silhouettes and cut-outs in a career that has taken in everything from pop-up books, fairy stories, nursery books and sound-effect books to CD-Roms, posters and designs for Theatre de Complicite and the Royal Opera House’s Beauty and the Beast. ‘Central Poland was as flat as a pancake, so, of course, our mountains – our places of adventure – were the forests. In the forest you have darkness so your eyes adjust to the gloom, then there’s a clearing and suddenly you have light, and everything looks dark silhouetted against the light. I think that’s why they’re so popular in those parts,’ says Pienkowski by way of explaining his own, seemingly never-ending, pleasure in working with the form.

But it wasn’t until the mid-1960s – after boarding school in Herefordshire, English and Classics at Cambridge (during which he co-founded the greetings card company Gallery Five in an entrepreneurial burst), a stint in advertising art direction, TV production at the BBC and cartoons and graphics for BBC children’s series Watch – that Pienkowski’s spare-time hobby of children’s illustration began to come to the fore. A Necklace of Raindrops, by Joan Aiken, became his first real foray into those childhood silhouettes that he’d put aside decades earlier. ‘It began as sort of an accident really,’ he recalls. ‘My university friend Anne Carter was children’s editor at Jonathan Cape, and she suggested I have a bash at illustrating Pie In the Sky, a full-colour book about four characters in a pie flying above cities. I did it, but wasn’t terribly happy with the figures and faces of the people in the pie, so at the last moment I got some black ink and I blacked them in. Still wet, I drove these to the publishers and got the job.’ And the rest, as they say, is history. 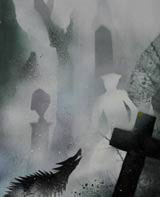 Pienkowski puts his success in the silhouettes down to ‘being good at it and not having too much competition’. His candour and willingness to credit collaborators suggests a very real modesty, and also a simplicity that is belied by the subtle nuances of his work. Looking at the changing style of the silhouettes over the four decades, it’s obvious that Pienkowski experiments inventively and is also delicately influenced by the cultural zeitgeist; the body shapes, postures and sly wit in the forthcoming Fairy Tales are undoubtedly of their time, as much as the trippy, hippy colours and tones of the marbling in The Kingdom Under the Sea are representative of the late 1960s.

Once rooted in Pienkowski’s eastern European culture, this type of illustration is now hugely popular worldwide – even Topshop has just brought out a range of decorative wall stickers that borrows heavily from the style – but there’s no doubt that Pienkowski is still the master.

Does he plan to stop at all? ‘No. In fact, where Fairy Tales has drawn silhouettes that are then cut out, the next book will be entirely cut out,’ he promises. With that book under way, Fairy Tales due out next month, an anniversary edition of Haunted House (complete with new pop-ups) due out later this year, and a forthcoming London exhibition, you suspect that Pienkowski is at the top of his game and a long way from stopping. ‘Retirement? I keep thinking I might like to sit in the garden and not think of anything in particular, but I suspect that if I did that, I’d start thinking that I’m meant to be doing something,’ he says.

Jan Pienkowski’s The Fairy Tales will be published by Puffin on 27 October, priced £14.99

Lovegrove goes with the flow for bathroom collection