Ananya Rao-Middleton’s entry into illustration was unorthodox. Despite studying art in school, a lack of confidence meant she didn’t pursue it at university – instead opting to study history and anthropology.

It wasn’t until an accident involving a head injury that Rao-Middleton would be reintroduced to her creative side. Unable to work for six months, painting became an escape, she says. “Symptoms like light sensitivity meant I couldn’t use my phone or laptop – painting was one of the only activities I could do without exacerbating my condition.”

Painting eventually gave way to illustration, as Rao-Middleton looked to make a living from her previously untapped creativity. “It wasn’t the traditional way into the field, and no, I don’t recommend it,” she laughs. 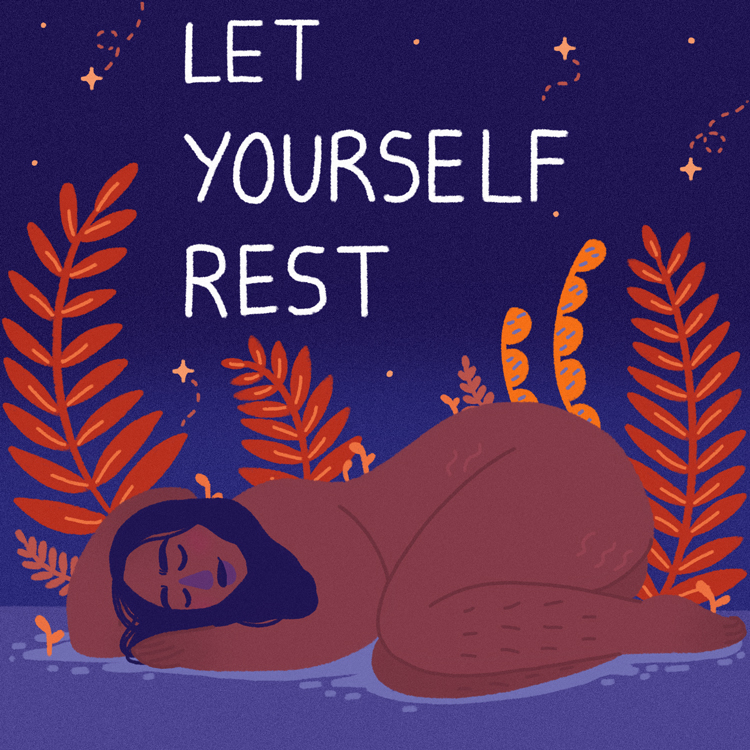 Like all illustrators, Rao-Middleton spent the early stages of her career developing her signature style. Nowadays her work is characterised by bold colours, texture and stylised characters – but she says it took a while to get this point, not least because she had to teach herself some of the basics that other illustrators learn at art school.

“The first few paintings I did came out a bit naff because I didn’t have a grounding in colour theory yet, for example,” she says. The greatest teacher in that particular field of study turned out to be mother nature herself, she recalls. “I’d look at imagery of nature and study how the colours worked together – I’ve yet to see a bad colour palette found in nature.”

As for her style of drawing people, Rao-Middleton says this was influenced by her aforementioned anthropology studies. “In my academic life, much of the work was focused on people, so I knew I needed to get the people right here too,” she explains.

She adds that seeing how other women in illustration – like Samantha Mash and Brunna Mancuso – created their characters according to their own style helped her feel confident in hers too.

“There are way more lived experiences than just mine”

Rao-Middleton’s distinctive style has seen her work with clients like the UN, the BBC, the UK Parliament, brands like Schuh and Instagram, and magazines like Refinery29 and Bitch. In all her client work, she says she approaches projects in a “consultative” way. “It’s something I’ve learnt along the way: you want clients to see you as an equal player who is knowledgeable about your craft,” she says.

This results in a lot of questioning, Rao-Middleton explains. She aims to interrogate the creative side of things and the intention behind a project in equal measure. This is especially important as a lot of her work deals with subjects like social justice, gender, race and disability, she says. “I feel like I need to put my input into briefs like this and there are definitely times when I tell clients they shouldn’t be approaching a topic in the way they are.”

Her consultative approach also means thinking carefully about representation. While Rao-Middleton is a disabled woman of colour, she doesn’t claim to represent any of these communities. For Rao-Middleton, brands that think they can work with her as some kind of box-ticking exercise are mistaken. “There are way more lived experiences than just mine,” she says.

Rao-Middleton interrogates briefs the way she does out of a belief that illustration is an important medium for activism. She recalls her own journey into the practice: “I came to illustration through my head injury, when I was looking for accessible ways to communicate.” She says illustration can cut through the often complicated and academic noise of social justice and activism circles.

“I think illustration can be a really important tool for activism for understanding ideas without having to read a wall of text,” she says. But as well as supporting her own activism, Rao-Middleton says illustration has also been a help personally. Starting out, painting and illustrating were therapeutic – she recalls it being “one of the only times I wasn’t hypervigilant about my body”.

Now a full-time illustrator, she says her craft allows her to look after her time in a way that better suits her. “I’ve been in nine-to-five jobs and I feel like going freelance has helped me actually get in touch with my energy levels and honour the way I need my day to be paced,” she says. it’s something she says she would encourage other disabled people to experiment with too.

“The creative expression has been really freeing for me,” she says. “And I think others could benefit from it too.”