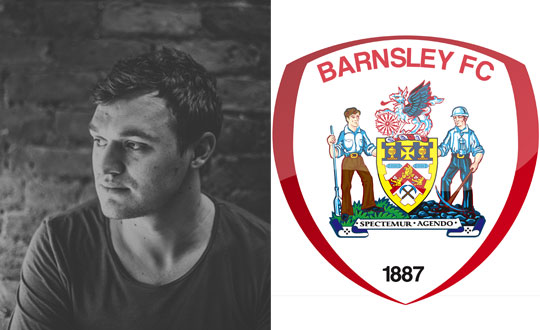 “Football has nothing to do with branding, but they both inspire the strangest sense of loyalty. And as such I couldn’t pick any other club’s crest but my own; Barnsley FC. It’s by no means the prettiest or most sensible and fails miserably on the spinning-around-on-Sky-Sports-News test. I’m sure it falls into the category of crests that designers most love to hate, but I think these are the reasons I love it. These idiosyncrasies, quirks, and personality traits are exactly what current branding process seeks to eradicate in favour of some design-crusade for simplicity and uniformity. But what a boring world that would make.”

“I couldn’t name a Kaiser Chiefs player. I’ve never seen them play. But their crest has established their reputation as one of the icons of the global game. Epic colour scheme, graphic tribal illustration, custom comic book typeface. Yes, yes, yes. The critic in me would suggest the basic ball illustrations are ripe for evolution, but there’s something charmingly naive about them that adds to the authenticity of the overall design. Created over 40 years ago, they reflect how bad the rest of the crest might have been – and how utterly brilliant it ended up.”

“The Tottenham Hotspur FC Cockerel of course. This is undoubtably a biased selection – but it is hard not to admire the balance and beauty of the elegantly drawn cockerel standing proud on top of the vintage football – free of a cliched shield or random holding device. It’s an apt representation of the stylish football Spurs has always played.

Why a cockerel though among a sea of lions, eagles, tigers and liver birds? Well, it’s a reference to the riding spurs worn by local historical legend “Harry Hotspur” and the miniature spurs worn by fighting cocks used in cock fighting – which it seems was a popular form of entertainment around the time of the club’s inception.”

I’m not much of a football fan – my dad is from Peckham and supports Millwall and that’s enough to put a kid off football for life – so my favourite badge is based on cold hard graphic execution, rather than any emotional attachment to a club. I went to school with a girl who was madly fanatic about Wolverhampton Wanderers – she used to come to school on mufti days sporting her favourite shirt and I was always captivated by the bold graphic wolf’s head badge. Simple, modernist, symmetrical, abstract and bloody aggressive – it almost makes me want to like football…

As a Gooner, I could easily opt to go with the iconic simple canon from the 1970s, but for me, the badge that’s most iconic and well designed is that of my home city, Wolverhampton. The Wolves crest from the eighties is beautiful in its simplicity. First used in 1979 and remained until 1988, the simple angular shapes create the iconic wolfs head in its simplest form while still retaining a sense of power and intimidation. Even better is it’s a badge you can easily draw, a symbol that would adorn many of mine and my brother’s schoolbooks growing up.

What’s your favourite? Let us know in the comments below