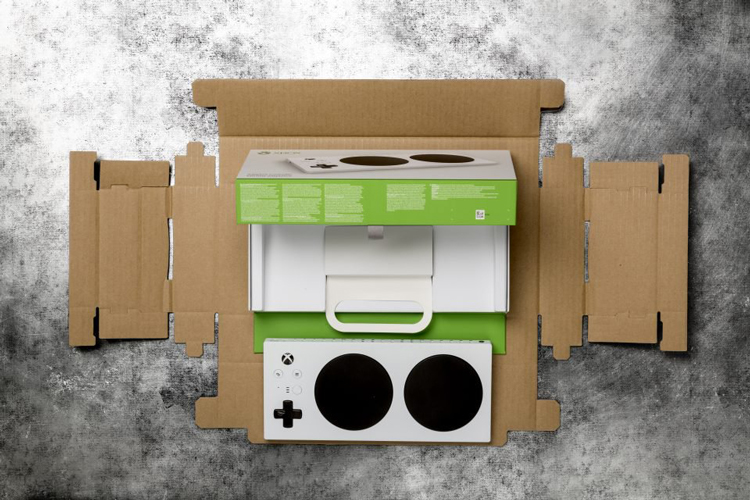 Microsoft is due to launch its Xbox controller specifically designed for those with disabilities and reduced mobility later this year – and now, has redesigned its packaging so that it can be opened as simply as possible.

The adaptive controller was announced earlier this year, and is customisable with gamers’ existing assistive aids to allow anyone to play games.

This means those with reduced hand mobility can plug in their own buttons, joysticks and switches to mimic a standard controller, allowing them to play any video game, and can customise each aid to do certain tasks such as make a character jump, run or shoot, rather than relying on pressing specific buttons on the standard Xbox controller.

Following a consultation with users, Microsoft has now also thought about how the company will package the product when it launches in September.

Twist ties and thick plastic wrapping has been ditched, and integrated loops and hoops have been added to the cardboard box to enable the controller to be removed easily, says the company.

The exterior of the shipping cardboard box features a main, large loop fastening held in place with sealing tape, which can be pulled off with one hand. The box then pops open, with cardboard air cells at either end of the box to protect the product without the need for bubble wrap and plastic. The lack of plastic also aims to enable the box to be easily recycled, says Microsoft.

The inside product packaging box for the controller also features two loops, which peel off. A ribbon loop and a hinge opening on the box then enables users to lift the lid off “without a large amount of movement” and with just one hand.

Once inside the product box, loops are also integrated to remove the controller, its cables and quick-start guide from the box. Tape and plastic are not used to hold any elements in, so the products can be shaken out of the box if need be.

The start guide is explained in four diagrams on one sheet of A4 paper, rather than a lengthy, text-based booklet. Microsoft adds that the packaging has been designed with discreteness in mind, and “[doesn’t make] too much noise when you slide the controller out”.

The Xbox adaptive controller is compatible with all Xbox games consoles and Windows 10 PCs, and will be released in the UK in September this year, priced at £74.99.

All images courtesy of Microsoft.