Strolling through the Dutch city Eindhoven, there’s a strange contrast of quaintness and a more contemporary industrialisation. Cobbled, brown-paved side streets and many an old-fashioned bicycle grace the area, but these are intermingled with high-rise, concrete buildings, futuristic art installations and an incredibly efficient public transport system.

Over a century ago, Eindhoven was a mere village, but since tech giant Philips – most famous for its lightbulbs and lamps – was founded there in 1891, it has grown to become the fifth largest city in the Netherlands. This has turned it into a place of invention and creation, with many techies and designers settling in the city. Huge, annual festivals such as light art installation show Glow, and nine-day-long extravaganza Dutch Design Week also take place there annually.

We visited Dutch Design Week 2017, and the expansive list of things to see was almost overwhelming. The festival was founded in 2005, and has since grown; this year, it took place across 110 different venues, and showcased the work of 2,500 designers.

This spanned everything from the predictable graphics, product and furniture expos and graduate shows, to an exploration of more surprising and imaginative topics such as the future of food design, and how we convey intimacy in the internet age.

Here’s a round-up of our favourite shows from Dutch Design Week 2017. 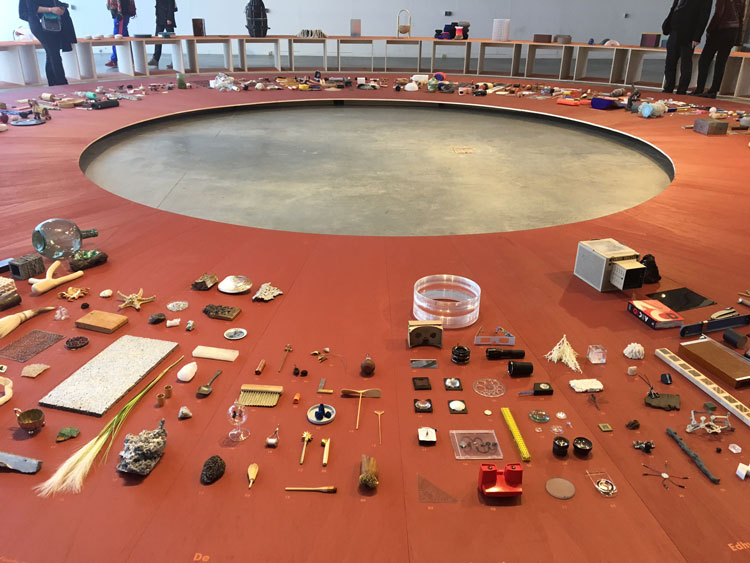 Dutch Invertuals is a group of 64 designers who have been hand-picked for their abilities to “push boundaries” in design. Since 2009, they have put on exhibitions in Milan and Eindhoven, and Fundamentals was their addition to this year’s festival.

Taking place in just one room, the show featured a circular display of work from 45 designers, laid out on the floor. The brief was to create a container and the range produced was eclectic, from woven baskets to reconstructed piggy banks. The outer circle revealed the final products, while the inner circle showed an unexpected selection of objects taken from individual designers’ studios, which have inspired them and their work.

More than 800 objects grace the room, and the exhibition offers an intriguing insight into the minds and working processes of various designers, and their own collections.

It is refreshing to see an exhibition space devoted to the less public and more personal aspects of making, and how this differs across disciplines. Particularly questionable objects include a “dentures spoon” (a plastic spoon with fake teeth attached at the end), a pair of Rwandan woven loafers and a plastic toy dinosaur.

The world of blinds, shades and shutters is not the most riveting – but this exhibition, another venture from Dutch Invertuals coupled with blinds brand Luxaflex, brought to life window coverings through a series of animated exhibits.

Designers were commissioned to reinterpret blinds, and look at how various materials and shapes can change how we view colour and light.

Exhibits included a moving, geometric installation by Studio Mieke Meijer, which opened and closed based on its changing surroundings, such as light intensity and temperature. Another moving installation by Jetske Visser and Michiel Martens featured a forever-twisting series of shiny strips hanging from the ceiling, creating a dazzling and prismatic effect as light and colour bounced off them.

One of the more playful installations was Daniel De Bruin’s modern interpretation of metal blinds, which consisted of electric panels that lit up as they were pushed in, like buttons; a satisfying and realistic interpretation of something traditional. The piece aimed to “bring back a sense of tactility” as things are becoming “rapidly automated”, De Bruin says.

The intricately arranged exhibition space, designed by Tijmen Smeulders, featured various blinds suspended from the ceiling, separating out the different installations and creating intriguing blind spots for visitors, meaning they have to physically peer round corners to see hidden sections.

Based in Eindhoven’s bleak, industrial Working Friends building with its tall ceilings, bare pipes and concrete walls, the setting was fittingly reminiscent of a warehouse retail store like B&Q or Homebase.

The college’s annual graduate show is part of Dutch Design Week, and the 2017 edition displayed an interesting array of conceptual product designs, many of which have a wider social purpose.

Displayed across the top floor of the vast factory space, the different projects were laid out on plinths with flip pads next to each one, where visitors could rip off information as a nifty keepsake and a useful reminder about each project and its designer – a practical replacement for wall signage.

Printstrument is a kit of 25, 3D-printed, modular parts, which can be put together in various combinations to create different instruments. They can be customised by colour digitally and ordered for printing, so can be made bespoke to each child’s tastes.

“There are no rules,” says Politis. “The digital files mean that kids can have any colour combinations they want, and if they lose parts, they can just be printed again.”

The aim is to allow kids to explore their own musical avenues and test different instruments, rather than “being pushed by their parents”, Politis adds.

Another concept was Lisanne Koning’s Inside the Box – a project that turns refugee aid relief packages into a fun game for children. The cardboard boxes, which contain crucial items, are themselves turned into something useful, with colourful, cut-out animals, cars and board games printed on them.

They come with construction instructions, and can be easily cut out and put together to make toys, says Koning, in an attempt to make sure aid boxes “are not wasted” but are given “a new life” and “brighten the days of the most vulnerable”.

The concept was tested with a group of Syrian refugees living in the Netherlands, and was received positively, she says: “There is currently no place in relief aid for toys. This adds something that can make it special – kids need to play, too.” 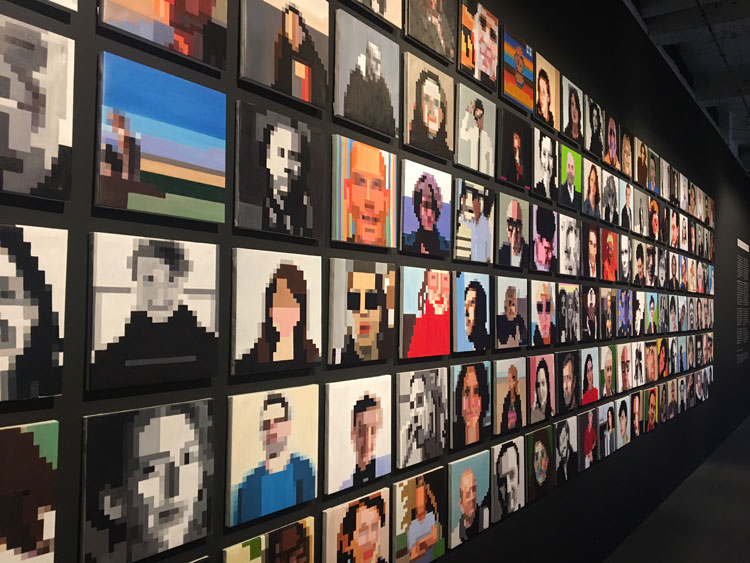 The internet and the “cloud” are intangible concepts that can be difficult to visualise. So what if we could represent them in physical form?

Exhibition Materialising the Internet was a fascinating attempt by 20 designers to demystify a concept that is little understood by the general public.

One particularly literal exhibit included a brass pipe, glass and smoke installation that aimed to physically depict the way internet signals are transmitted across continents.

A more tongue-in-cheek piece was a working vending machine selling scratch-cards, where users could win 25,000 new social media followers – a comment on society’s growing need to be “liked” online.

A more surreal exhibit was a video displaying a project called Lauren. Artist Lauren McCarthy is trialling herself across people’s homes as a human smart home assistant, similar to Apple’s Siri or Amazon’s Alexa. In a similar way to an artificial intelligence (AI) system, Lauren deploys cameras and smart devices across people’s homes, “watches over them 24/7”, and will adapt to understand their needs and wants.

The project aims to make the point that a machine lacks the empathy of a human, and is a creepy but poignant way of showing how our lives have become constantly under surveillance.

The Embassy of Food: The Future of Food 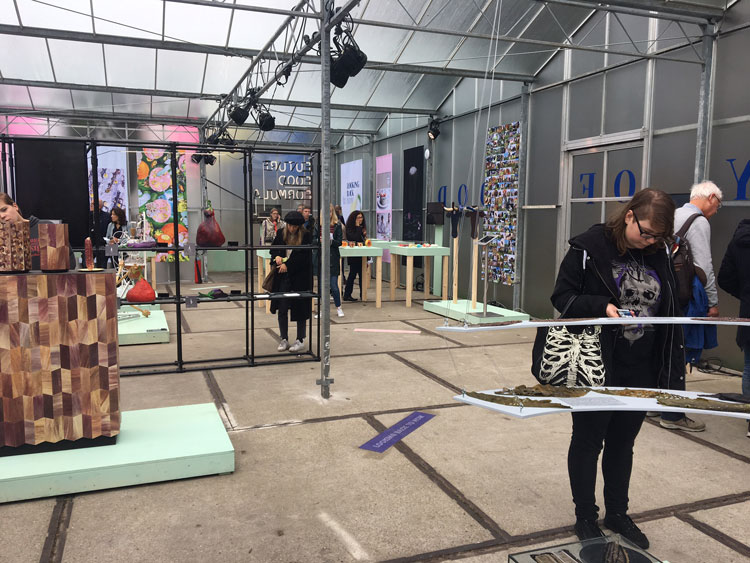 This unique exhibition felt like the kind of thing that would be well-suited to London’s Wellcome Collection. Set within a greenhouse-style space, the show depicted a potential future for how we could produce and consume food through a series of interactive exhibits.

Visitors received an earpiece, which provided a first-hand account of a person of the future, explaining how each concept had helped them and improved their lives.

Interesting concepts included Volumes, a series of objects that could be placed in the middle of plates and bowls to help us limit and control our portion sizes; A Future for Fish, an initiative to find synthetic alternatives to fish as has already been explored with meat; and Mela, a series of chocolates that could be used to measure bacteria in the gut and determine how healthy we are.

At the end of the exhibition, visitors were asked to choose the concepts they thought were most viable and felt most positive about, forcing them to think about their own food consumption, and how they can be more conscious of animal welfare and environmental issues.

Rather than actively promoting any of these interesting, strange and terrifying concepts, the exhibition constantly asked the visitor to come up with their own opinion and ethical perspective.

While it was impossible to cover all of the festival in just a few days, what we saw at Dutch Design Week showed the city to be full of creativity and inventiveness, and unafraid of looking to the future.

The vast, industrial, factory spaces of Eindhoven provided a fitting setting for the futuristic feel of the show, creating both a sense of awe and trepidation among visitors around the possibilities of design. Hopefully next year will bring even more of the unexpected.

Dutch Design Week took place 21-29 October 2017 across various venues in Eindhoven, the Netherlands. For more information, head to the website.

Rebranding a craft beer festival as a totalitarian state