There are still months to wait until the first primaries, and well over a year to go before the election itself, but a new generation of presidential hopefuls are already hard at work in the US.

In such a competitive race, a recognisable brand can be a good head start. Aiming to replicate the success of the “Obama O” or the infamous MAGA baseball cap, design teams will have already worked for months to distil campaigns into a single icon, capable of being replicated on everything from front yard signs and billboards, to stickers and badges.

The offerings from some of the highest profile candidates, however, haven’t impressed everyone. From designer Susan Merriam suggesting Tom Steyer’s logo is “undistinctive,” to writer and designer Debbie Millman labelling Andrew Yang’s logo “an abomination”, it seems it’s hard to evade critique when it comes to presidential graphic design.

Part of the issue with logos past is their reliance on “traditionally presidential” graphic language. That is, the usual options are red, white and blue, stars and/or stripes.

“I feel a general ‘weariness’ when it comes to the branding of presidential hopefuls,” says founder and creative director of Johnson Banks consultancy Michael Johnson. “After decades of pushing the same colours, typefaces and iconography around, the field is screaming out for a new approach.”

Graphic designer and Pentagram partner Michael Bierut echoes this: “There’s this idea that the red, white and blue, stars and stripes are the ingredients from which you can make your own dish.

“Political graphics, until really recently, were one of the areas in public life that were completely antiquated and untouched by contemporary design principles. Logos were largely unchanged from how they might have looked even 50 years ago.”

“Tension between designers and authentic expression”

So why do candidates, past and present, cling on to the same limited motifs and colours? Bierut suggests the reason has nothing to do with originality, and a lot to do with authenticity.

In the run up to the 2016 presidential election, Bierut lead the team that created Hillary Clinton’s famous ‘H’ logo. Criticised for being “insultingly vapid” while also being praised for being “an effective piece of graphic design”, Clinton’s logo divided opinion.

Public feeling on the logo generally warmed as the race progressed and the design revealed itself to be customisable for different contexts, something the team had meticulously planned. But what the design – and Clinton herself – couldn’t shake throughout the campaign were accusations of artificiality. This is something Bierut himself has had to consider.

“One of the problems that arose [in the run up to the election] was this suspicion of expertise and the elite classes,” says Bierut, suggesting in hindsight that Clinton’s campaign design was probably too polished to the point of turning some voters off, especially when put up against Trump’s “rough around the edges” approach.

“There will always be this interesting tension between what professional designers do best and the kind of personal, passion-driven, authentic expression of commitments that are persuasive to the general public,” he says.

By staying within the lines, candidates both past and present, avoid appearing “over-designed”. Instead, they’re able to play on the traditional narratives that have helped presidents get elected for decades.

But with all that said, many of 2020’s candidates have this time ignored tradition completely, in favour of the new emerging trend of ultra-personalised, colourful designs.

Johnson points out Senator Elizabeth Warren’s green and navy, underlined, sans serif stamp, as being an example of pushing existing boundaries. Warren’s decision to run the race untraditionally on all fronts appears to be paying off, since she currently sits at the front of the polls for the Democrat nomination.

Johnson suggests it was Obama’s “O” that started the ball rolling back in 2008. “The original Obama campaign was approached as a systematic brand and digital project and showed a new way to do things,” he says. 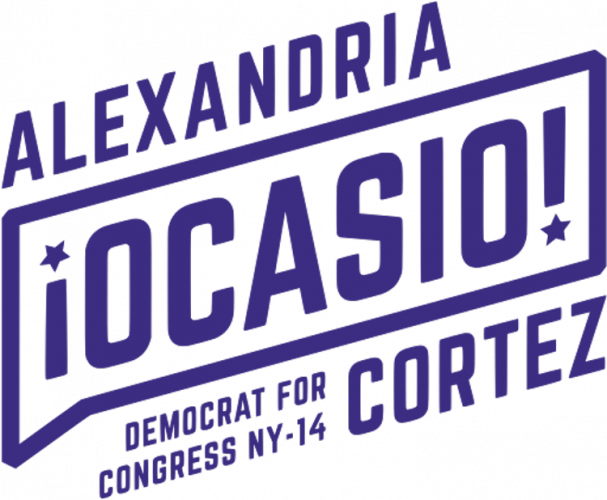 “Great brands always have good passion behind them”

More recently, candidates might have taken inspiration from Congresswoman Alexandria Ocasio-Cortez’s mid-term campaign back in January. The campaign was designed by New York-based consultancy Tandem, and was iconic in its bold use of colour, slanted text and Spanish influences.

“Her graphic design work played a huge role in taking her from this unknown candidate, into office” says Bierut. “Through a bunch of graphic cues, she showed voters who she was – someone radically different.

“I think the team did an amazing job – they were completely emotionally invested in her ambition to enter public service and that translated into what the public got to see later. Great brands always have good passion behind them.”

Graphic designer Michael Wolff – the designer behind the New Labour visual identity of the early 2000s – says much the same thing: “If you can clearly point out your purpose, that purpose will get across much quicker.”

But more than anything else, Wolff believes to have a good design, you need to “get under people’s skin”. According to him, neither a traditional logo nor a boundary-pushing one will work without “the people’s willingness to accept it”.

It is in this way that campaigns with decidedly less elaborate iconography – Trump with his MAGA hat, for example – are able to so convincingly create a brand. “People turn it into a brand in their own minds,” he says.

The temptation for designers working on presidential campaigns, Bierut suggests, is to create a 360-degree branding conception that can cover any weak spots. But this has its limitations.

“This can actually create an airless environment that doesn’t ever actually let the real world in,” he says. “Instead, our responsibility is to leave room for [the candidates] to connect directly with the public.”

Michael Wolff sums it up well: “Quite often I hear designers say that they create brands, but that’s not true,” says Wolff. “The public create brands, we are just part of the process of getting them out there.”