Last year, one in six new food products launched in the UK were plant-based. This is good news for consumers, who currently spend around £443 million a year on vegetarian and vegan goods in the UK.

But with so many options appearing in stores, designing for the vegan market is more demanding than ever. Designers need to distinguish their products in an increasingly crowded field, while also making them recognisably vegan. In the process of trying to effectively balance the two rationale, a diverse but observable vegan brand has emerged.

From plant milks and meat substitutes, to cheeses and chocolate, the key to some of the most successful vegan branding seems to be personality-driven packaging.

“You can see there’s a really bold attitude being adopted [by vegan product designers] at the moment, and packaging design is so important in conveying this,” says founder and creative director of Jackdaw Design Amanda Jackson, who has worked in the sector recently.

“Most of these new brands are quite small – they’ve got little to spend on marketing so the first time consumers will really see them is in-store. The packaging has to work really hard, because there are so many vegan alternatives now and they’re all kind of shouting at consumers from the aisles.”

Popular plant-based brand Oatly’s design is the prime example. Swedish design consultancy Forsman & Bodenfors led the rebrand of the company back in 2014 and identified Oatly’s packaging as its “main media channel and an advertising space in itself”.

Oatly’s cartons are plastered with graphic straplines like “Wow, No Cow!”, “It’s like milk, but made for humans” and “Post-milk generation” alongside short, comic manifestoes touching on the company’s work and environmental mission.

Designed to be witty and often tongue-in-cheek, Oatly’s packaging directly opposes the “preachy vegan” stereotype. According to Jackson, Oatly’s is an example of a vegan challenger brand “developing its mainstream appeal”.

Moving away from tradition

Developing mainstream appeal requires brands to attract more than just devout vegans. One of the ways many are doing this is by ditching traditional vegan graphic language altogether.

“Lots of these new brands aren’t using greens and browns and muted colours anymore – they aren’t trying to appear natural or rustic or anything like that,” Jackson says. “They’ve moved away from that now.”

Going even further than just avoiding certain imagery, popular meat alternative Oumph adopted “classically meaty visuals” for its rebrand. Led by Swedish creative design consultancy Snask, the use of the chalkboard aesthetic was designed to remind consumers of the food trucks and butchers’ shops where it might traditionally be found.

Founder and creative director of Snask Fredrik Öst says Oumph’s packaging looks “delicious, rather than morally correct or green and healthy.” His team consciously decided against vegetarian and vegan imagery, because of the preconceptions consumers might have about the product.

“The insight was that just because you’re vegetarian or vegan, doesn’t mean you want to eat healthy necessarily, just that you don’t want to eat meat” says Öst. The design reflects this, with even the strapline “Epic veggie-eating for free-range humans” sidestepping any specific mention of vegetarian or vegan.

With one in five Britons identifying as a “flexitarian”, designs that attract the “lifestyle shopper” are necessary. By avoiding traditional associations of veganism, brands don’t risk alienating anyone.

“If you think back to Quorn being launched in the 1980s, it came out specifically as a meat substitute,” she says. “They spoke about what they weren’t – meat – whereas these new challenger brands are focusing on what they are.”

This shift of focus allows foods to be products in their own right, rather than just vegan alternatives. This makes for more accessible brands, according to Jackson.

In her work with vegan doughnut makers Borough 22, she points out that veganism took an entirely secondary role in the design: “They aren’t aiming to make their audience niche, they’re looking to be as inclusive as possible.” 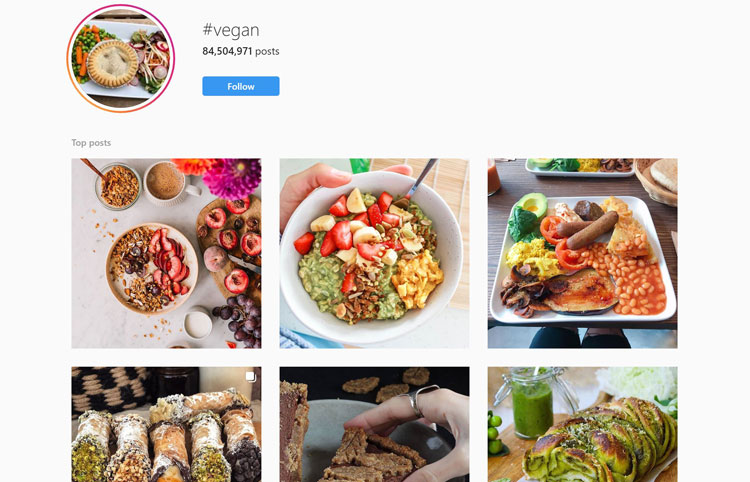 Looking beyond the package

Jackson points out that on top of all other aspects, the most successful vegan product designs look beyond the supermarket shelf.

“Like everything else, you want your product to be shareable and Instagrammable,” she says. With over 84.5 million posts tagged #vegan on Instagram, and a further 17 million tagged #veganfood, catching the eye of social media scrollers is a valuable use of time.

Similarly, so can drawing attention to a wider environmental cause. “Consumers want to feel like they’re buying into an ethical brand,” says Jackson. Appealing to an environmentally-aware audience – whether it’s with ethically sourced ingredients or sustainably produced packaging – is worthwhile.

“Shoppers are much more savvy than before,” she says. “[Products] need to be eco-friendly, sustainable, attractive, vibrant and inviting. It’s a super tight, conscious operation now.”