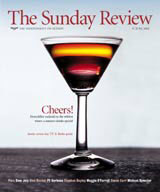 The arrival of a new editor usually heralds a period of change as the dust flies and apparatchiks of the former regime get their comeuppance. That’s what happened on The Independent on Sunday when Tristan Davies replaced Janet Street-Porter at the helm earlier this year.

In this context, a redesign is a real statement of intent, an announcement that things are going to be done differently from now on. Orchestrated by IoS art director Carolyn Roberts and Courtney Murphy Price, design consultant and art director of the Sunday Review, the revamp is far reaching. It incorporates a reorganisation of several sections, as well as the introduction of an entirely new one, SportsActive, aimed at transforming readers from couch potatoes to gym rats. As if that wasn’t enough, a whole new visual and typographic approach was developed around Davies’ editorial ideas.

The designers had just six weeks to complete the programme, though Murphy Price concedes this wasn’t ‘from a cold start, as I had been working on projects for the Independent News and Media Group earlier in the year, and had done a lot of font and grid research already. Though some of the architecture was thus approved almost instantly, the difficult task of making the ideas come to life lay ahead.’

In essence, this came from Roberts’ idea of introducing what Americans term the ‘centerpiece’ to the section fronts and other prominent pages. ‘It’s almost like having a mini-poster on the front and then building the rest of the page around it,’ explains Murphy Price. ‘It’s more of a US approach that has a time-starved appeal – there are more entry points so you can dip in and out of it more easily.’ Other design features were led by content changes, including more features, boxes and smaller items, giving the paper a different feel and more texture.

Even more fundamentally, a new typeface was introduced throughout The Independent on Sunday. Poynter was designed in 1998 by Tobias Frere-Jones of the Font Bureau, a Massachusetts-based type foundry, with input from the Poynter Institute for Media Studies, an influential American media think tank. The typeface was designed after years of research (much of which centred around the ideas of 16th century typographer Henrik van den Keere) and input from newspaper and publication consultants. ‘We think it’s stylish, readable and modern and sits comfortably with the Minion [typeface] used in the Review,’ says Murphy Price.

By the end of the redesign, the sports desk had dubbed Roberts and Murphy Price ‘The Poynter Sisters’.

News of robotic reporters trying to wire the world