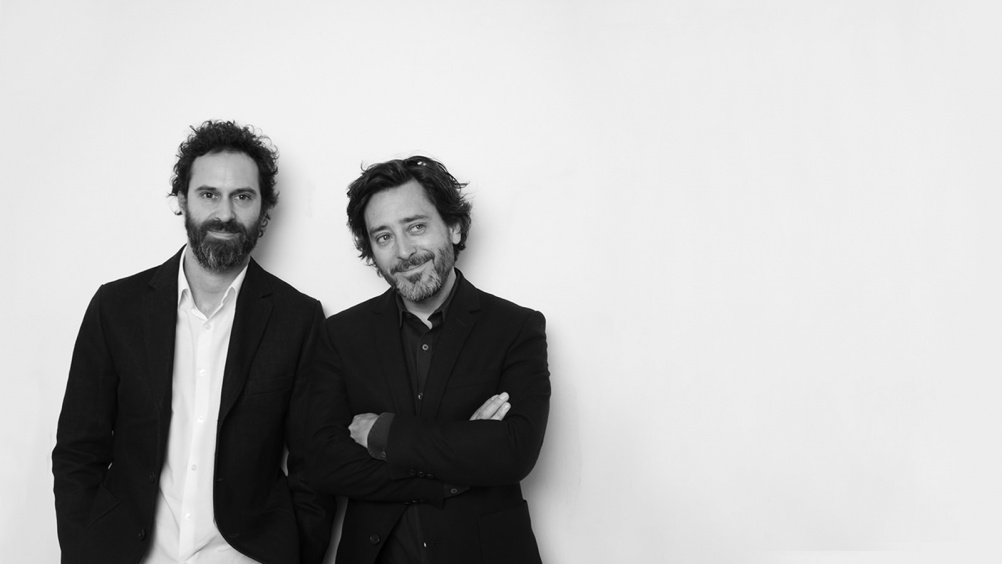 When we caught up with Edward Barber and Jay Osgerby we found them to be as busy as ever with a host of major projects on the horizon as diverse as the new Crossrail train and a tableware set for Royal Doulton.

If there is one thing that defines these product, industrial, interior designers it is their relentless versatility.

The Crossrail train will be a landmark project for Barber and Osgerby and for the London. Commissioned by Transport for London, the train will ferry 1,500 passengers at a time from Reading and Heathrow in the west, through new tunnels under central London to Shenfield and Abbey Wood in the east.

Barber and Osgerby were appointed last year to work on designs for Crossrail trains. They were tasked to develop a single design solution for all the trains that will run on the line. Each train will be just over 200m long, made up of nine walk-through carriages and able to carry up to 1,500 passengers.

Barber and Osgerby’s design will take to the tracks in 2017, and consultancy co-founder Jay Osgerby says that they have just entered a “hugely complex” prototyping stage. Fellow founder Edward Barber adds: “We’ve pretty much finished the design for the whole project now – interior and exterior – some of the interior fittings are being prototyped at the moment but the concept and whole design is done.”

Although Crossrail is not expected to open until 2018 the trains need to be ready ahead of that “as they have to be tested for well over a year” says Barber.

Meanwhile, and in a very different design world, Barber & Osgerby have also worked on a special Royal Doulton collaboration, which will see a full set of tableware pieces brought to market in the spring.

Osgerby says that the pieces will be in ceramic, glass and wood, in addition to cutlery – which the studio is also designing  – and he calls it “a rare collaboration for us with a UK brand”.

Almost 20 years on from when Barber and Osgerby out, both designers remain very hands-on and now preside over three conjoined but autonomous studios. As well as Barber and Osgerby, the pair also operate interiors consultancy Universal Design Studio and product specialist MAP Project Office. “We like to think of ourselves as one company with three specialisms,” says Osgerby.

The eponymous Barber and Osgerby was formalised in 1996, working from Barber’s flat in the Ernő Goldfinger-designed Brutalist Trellick Tower, North Kensington. Today, all three affiliated studios share a building on Charlotte Street in East London.

Barber and Osgerby now consists of a small core team of six people. It works directly with product manufacturers and projects run on long lead times from anything between two and six years.

Barber says: “Anything which comes out of Barber and Osgerby is designed by Jay and myself, which isn’t the case with the other two companies.”

Universal Design Studio was started in 2001 and now has a staff of between 35 and 40 architects, interior and exhibition designers. There are two directors, a team of associates and design project leaders.

MAP, meanwhile, was formed in 2012 with a focus on research-led and development technology and has a staff of around 12 people with one director and a team of associates.

At this point in their careers, many designers-cum-business owners are also reluctant managers, but Barber says: “We are neither the best people to do that job or particularly interested in it. We are designers and that is what we do best.”

It is interesting that in their Barber and Osgerby guise they find themselves working on a rare domestic project, because these days they do most of their work overseas. This, they say, is not necessarily by choice, but rather because that’s where both the work and the consumer demand is.

In particular the relationships Barber and Osgerby have forged with the design factories of Europe and beyond have consolidated this.

Barber says: “In the last 20 to 30 years, quite sadly, there has been less manufacturing in Britain so British designers, including ourselves, predominantly work for manufacturers across Europe, North America and Asia.”

Of course the story of the of the decline of the UK manufacturing industry is not a new one, but while there is a marked resurgence in domestic cottage industry manufacturing, there is still little at the macro end of the spectrum, particularly in furniture, which creates a sort of designer brain-drain in the UK.

Osgerby says: “We’re always being reminded that in this country the creative industries are worth 5 per cent of the economy, but our designers are widely distributed around the world and, largely thanks to a great education, probably the best in the world.”

The Tip Ton chair by Barber and Osgerby is produced by Vitra in Italy, and predominantly sold in Europe, where it has proved very popular. But this provides another example of the divide between the British design scene and the rest of the world, the pair say.

“There isn’t a huge domestic market and culturally Britain hasn’t embraced contemporary furniture design as a whole,” says Osgerby. He adds: “You could go out into the countryside in Italy and find a shop selling B&B Italia – and that’s been the case since the early 60s – but in the UK it’s only certain parts of London.”

On that front look out for the studio at the Milan Furniture Dair in April as they’ve been working on a Knoll chair, a project with Glasitalia and new updates for their existing Vitra products .

Of course Barber and Osgerby’s most high-profile domestic project so far was the London 2012 Olympic torch – but looking back it was delivered with some trepidation, the pair say.

“Before the torch, the only things which had been rolled out under the name of the Olympics were the logo and the mascots, neither of which had gone down too well,” says Barber.

It’s hard to remember a public mood that was cynical, but before the hysterical spirit of Team GB had taken hold, there was sobering talk around London 2012 of delivery dates, cost and return on investment as well as what would happen after the Games.

Osgerby says: “There was a state of austerity and people thinking the Games was a waste of money, so right from the beginning we wanted to create something that everyone would want to follow and be interested in.

“It was the first time we had designed something of such importance and it literally rallied everyone together behind the idea of having a Games; fortunately it worked.”

Government estimates of 15 million people having taken to the streets for the Torch relay would suggest it had worked but “at the time” Barber says “we were really quite worried, as if the tide is against you in certain circumstances, it will always be that way whatever you produce”.

He adds: “We were really fortunate that the Torch was received incredibly well by the press and the public from the launch; obviously the relay itself is an incredibly popular event but it was at that point still a year before the opening ceremony.”

The design of the London 2012 Olympic Torch was laid bear recently when it appeared in The Design Museum’s Making of Exhibition, which was curated by Barber and Osgerby and showed the development of several design projects – their Torch included.

Each Torch weighs 1kg, is made from aluminium alloy and has 8,000 holes punched in it, to represent each of the torch-bearers who carried it around the country.

By the time the torch began to make its way around the UK in May 2012, after its journey from Beijing, it had already been named as The Design Museum’s Design of the Year a month earlier.

Deyan Sudjic, director of the Design Museum says of the design: “The 2012 Olympic Torch is elegantly designed and is a triumph of symbolism and beauty. The lightness and simplicity of the torch not only captured the spirit of London as Olympic host city but also demonstrated how design can celebrate traditional qualities in a modern manner.”

While the Torch was a landmark project for Barber and Osgerby it is one of only many that has defined them across disciplines.

It was their Loop Table for Isokon in 1997, which first captured the imagination of the design press and other design manufacturers including Milanese company Cappellini, which also introduced the Loop Table to its own collection a year later.

Meanwhile the Metropolitan Museum of Art in New York and the Victoria & Albert Museum in London took note and added it to their permanent collections.

Their interiors work soon gathered pace – particularly after Universal Design Studio was born – with one key project a flagship store in New York’s meat packing district for Stella McCartney in 2002.

Barber and Osgerby have designed several elements that became the visual identity of McCartney’s stores, one of which was a ceramic wall tile that had both a natural and a textural feel, combining a floral motif and a hexagonal cell-like pattern.

Then there’s the tech-led problem solving coming out of Map, like Kano, a self-assembly computer aimed at kids to get them coding and learning how computers work.

Still, the “ultimate goal” for the pair is designing the perfect chair. “Only a handful of furniture designers have ever done that,” says Barber ” – design the one that sells millions. When you’re working on one you see why that is.”

“We’d quite like to design a bridge though, but you never really know what’s coming up,” he adds.

Osgerby has a theory that the pair’s adaptability, and willingness to hop from one discipline to the other, is innate and has been ever since they studied together at the Royal College of Art.

This disregard for formal disciplines has helped Barber and Osgerby to foster a culture of fearless experimentation, and has guided them unexpectedly to the helm of three very different studios.

How should you vote? What political parties are promising designers