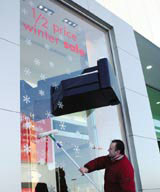 Yes, to highlight its half-price sale, the furniture retailer has positioned a fake sofa half-way inside and – you’ve guessed it – half-way outside its Lakeside flagship. The ingenious ploy is the brainchild of the equally wackily named Hot Props.

Kingdom of Leather is keen to ‘actively participate in the cutting edge of window merchandising’, says executive chairman Peter Dickson. You can’t argue with that.