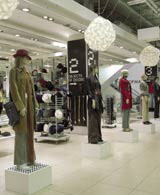 Some say the hip never lasts. But you know times are changing when you overhear American fashion buyers at London Fashion Week saying, ‘Of course I’m going to the show darling, but I have to go to Topshop first.’

Topshop has always been a profitable business, but the recent surge in its industry acclaim has been nothing short of phenomenal, particularly if you are a cynical Brit more likely to equate Topshop with ‘tack’ than ‘new black’.

But to its credit this is a brand that has spent the past couple of years picking up accolades like Time Out’s Retailer of the Year, The Independent’s Best High Street Retailer award and Glamour magazine’s Most Glamorous Place to Shop on the High Street. This is a brand that has entered a new era. Its recent ascent only goes to show that in the zippy world of London fashion absolutely anything can happen.

Possibly the biggest factor in the Topshop turnaround has been its new management team, headed by brand director Jane Shepherdson whose promotion from buying director squarely coincides with recent fortunes. Also key to the brand’s rejuvenation has been the arrival of marketing director Jo Farrelly, brought on board by Shepherdson from Levi’s two years ago.

‘My management team and I took over three years ago and its really since then that we’ve had the control to be able to take some risks and do things we instinctively thought were the right things to do,’ Shepherdson explains.

Shepherdson’s team can rightly take credit for the public’s love affair with the brand according to Juliet Warkentin, former Arcadia managing director for marketing and Internet development and now editorial director at Redwood Publishing.

‘Topshop has always been a power player, but the current team has made it the phenomenon it is today. It’s a tight, well-organised, professionally run team and Shepherdson e e is at the centre of it,’ Warkentin explains.

Shepherdson’s enthusiasm for what Topshop can still achieve can’t have escaped the eye of retail wizard Philip Green, who struck an £850m deal for the brand’s parent Arcadia in September 2002. Green has reinforced the autonomy of the Arcadia brands and given the brand directors control over retail, finance and human resources in addition to buying and merchandising. Hers may be a virtually all-female office, but the environment of Shepherdson’s team has become charged and apparently rather competitive. ‘Topshop is run by people who are also its customers, and that is really important,’ she says.

The brand has been extended through a series of new labels, chief among them Topshop Design – the focus for its collaborations with the fashion majors, including the likes of Zandra Rhodes, Sophia Kokosalaki and Marcus Lupfer. Mingled with the more established names are a slew of newer names too, like Blaak and Buba & Tata Naka, which Topshop has been keen to support.

Shepherdson’s team is based off London’s Oxford Street, right next to Topshop’s flagship, known by its address: 214. Alongside two core teams of clothing designers and buyers and merchandisers sit Farrelly’s marketers and an in-house graphic designer. With freelances, this ‘inner circle’ comprises about 60 people. Externally, Topshop has no ad agency and works with few regular outside consultancies or agencies on brand communications, says Farrelly.

‘We don’t pin our colours to one particular agency with the exception of Ronnie Cooke Newhouse, who creatively directs all our photographic and advertising campaigns,’ says Farrelly. ‘We’re very open when it comes to working with other creative talent. We link up with people who make sense, but it’s an open creative forum, it’s not like we work “only this way”.’

‘Up until about three years ago we didn’t market the brand at all,’ adds Shepherdson. ‘Back then it was about shops and products – your windows would sell the brand or not.’

Cooke Newhouse is creative director for Topshop seasonal campaigns and an external consultant for the brand. Having worked with top end luxury brands such as Commes des GarÃ§ons, she has injected a distinctive lease of personality and style into Topshop’s advertising and in-store campaigns.

She oversees one-off collaborations with some of the better known lifestyle illustrators and photographers, such as Daisy De Villeneuve and Rankin who have worked on recent promotions. But equally, Topshop has commissioned from among the up-and-coming British creative set, to foster a fresh London buzz around the marque. ‘We get a lot of exposure for a minimal spend because we do things that are unexpected,’ says Farrelly.

‘We use a lot of alternative media to communicate our messages. Other youth brands, or high fashion and more luxury brands all have serious advertising spends, but we make another kind of noise. We try to talk more directly to people like young students, which is where we put a lot of our marketing effort.’

This grassroots attitude to promoting the brand has seen Topshop not only offer student discounts, but also becoming very involved in sponsoring young creatives, such as via the recent Re-Creation competition with Dazed & Confused magazine. The award scheme intends to promote future creative talent and has among the judges names such as Peter Saville, Tom Dixon and Janet Street-Porter.

Such proximity to its customers has seen Topshop promoting a more personable image than many retail rivals, as typified by the anti-fur policy it advertises in its windows. It’s a position that makes a rather overblown press report about a supplier in the East End of London, which was allegedly paying staff below the minimum wage, all the more unfortunate. Luckily Green dealt with the incident swiftly and is said to have immediately severed links with the company and its goods.

Over at 214, the Topshop team isn’t shy of trying out things it considers interesting for their own sake, not necessarily to make money, but for the good of the brand. ‘It’s like having your own boutique,’ says Shepherdson with gusto. ‘You can do anything, break all the rules.’

Recently, it brought in someone to customise pieces of nightwear – for the hell of it. As it turned out the idea caught on and somehow started to make money. But it probably could not have been predicted, it just happened.

‘People say, “You can’t do that”, and we say, “Why not?”. We can do anything we like, if it’s what people want. There’s nothing to stop us doing anything if we think it’s exciting. That store has to be a wonderfully exciting place.’

Warkentin says that 214 has also been fundamental to the brand’s resurgence. ‘Some people might look at the opening of Topshop Oxford Circus as being the moment when things really started to take off for the brand. It was then that it started to really fly,’ she says.

Shepherdson agrees, ‘If you took that store away the brand would suffer because we always find a way of applying the things that we generate there and the ideas that we come up with to the other stores.’

In fact, shoring up the other stores in the chain is next on the team’s agenda, says Farrelly.

‘A lot of this good press has been unexpected and we look at Topshop and think it’s not perfect and there are so many things we’re doing, like making the other stores something special.

It’s easy to knock success, particularly in Cool old Britannia where it’s an art form. But Topshop has hit the big time on its own merits, by understanding exactly what its customers want, how they want it and giving it to them at a good price. If it’s become a bastion of street chic into the bargain, who can blame it? You’ve either got it or you haven’t.

• Joined Topshop 17 years ago as an allocator

• Worked her way up to the position of buyer

• Appointed to the new role as Topshop brand director in 1999

• Now oversees buying and merchandising, retail, human resources and finance for the brand

• Moved into a role based around marketing communications

• Then became European advertising and promotions manager for Levi’s

• Joined Topshop as marketing director in 2000

S&M weighs in with Kilogram look