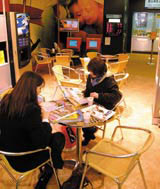 Rawls & Co has designed a 372m2 out-of-town store (pictured) in Swansea for Lunn Poly, as the travel retailer moves to rationalise a concept originally created by Checkland Kindleysides.

The consultancy, appointed in January 2002 after a five-way pitch, is understood to be earning a five-figure fee for the work. Lunn Poly intends to roll out the design in another ten locations this year.

Swimming pool-effect flooring and sand in the window beds are used at the entrance to ‘get customers into a holiday mood’.

The store is divided into two main areas, with brochures displayed under canopies ‘washed in coloured light’ and the sales section designed in more functional fashion.

Butt explains, ‘The effect is very theatrical in the areas where you’re deciding where to go, [because] it’s about delivering adventure and persuading people to go further afield. But we’ve stripped out the theatricality in the sales area. When you pay for the holiday, you want reassurance you’re getting a good deal.’

Lunn Poly propositions manager Doug Glenwright adds, ‘We wanted to create a hybrid of all the things working in our Fosse Park flagship [the Leicester-based store designed by Checkland Kindleysides] with changes we’ve been making in-house on the high street.’