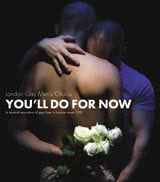 The London Gay Men’s Chorus is planning to embark on a raft of design-led initiatives to boost awareness of the organisation.

The charity, which seeks to fight prejudice through its touring choir group, is working with design consultancy Marsh and Malone on the projects.

Design work in the pipeline includes an overhaul of the company’s identity, stationery, uniforms, CD artwork, website and marketing strategy. The current identity was designed by Marketing Store Worldwide six years ago.

‘The identity is certainly due for a refresh and redesign and the website needs an overhaul’ says a spokesman for the London Gay Men’s Chorus.

Tony Malone, partner at Marsh and Malone, is overseeing the work from the London-based studio. The consultancy has partner studios in Milan and San Francisco, and working partnerships in Sydney and Stockholm.

Marsh and Malone, a sponsor of the charity, was appointed in January. It has designed a campaign, launching this week, to promote the charity’s forthcoming show You’ll Do For Now, taking place next month at the Cadogan Hall in London’s Sloane Square.

The visuals will be applied to a microsite, leaflets and also a range of merchandise for retail.