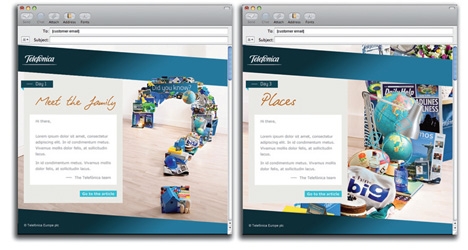 Someone and Lambie-Nairn have collaborated on an internal rebrand project for Spanish communications group Telefónica, which operates global brands including O2.

The rebrand work will see all employees, including those of O2, referring to the brand as Telefónica.

Work began on the project in August 2010, with O2 and Telefónica brand guardian Lambie-Nairn working on strategy alongside the in-house Telefónica team.

Someone was commissioned to lead the project creatively, as consultancy co-founder Gary Holt, formerly of Lambie-Nairn, had worked on the initial O2 brand creation.

The project involved creating a microsite with animation, movies and an interactive quiz and accompanying printed materials. There is also an online briefing pack, ice breaker, debating quiz and briefing materials for managers to communicate the benefits of being part of Telefónica.

The engagement programme will be used across the UK, Republic of Ireland, Germany, Czech Republic and Slovakia, meaning ’high impact and internal message cut-through was essential’, says Telefónica.

Amanda Clay, head of brand management for Telefónica Europe, says, ’We needed to galvanise the organisation internally. Both Lambie-Nairn and Someone helped us plan how can we make employees feel really proud of both Telefónica and O2 and be part of a global family.’

She adds, ’What we changed had to improve what was there before, we wanted to raise the bar to prove change is for the better.’

Holt says, ’The main challenge creatively was that it had to obviously be Telefónica and adhere to the Telefónica identity, but there was a nervousness that O2 employees wouldn’t engage with it. We created the question mark and globe made up of assets and ephemera to include recognisable parts of O2: it’s about being familiar and inclusive.’

The final elements of the internal rebrand the management pack launch this week.