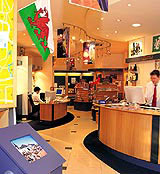 The Leicester consultancy won the category for the development which best addresses the needs of disabled people or other special needs groups. The award will be presented in April.

Having completed the award-winning first stage of the project last summer, Haley Sharpe is to begin work on the second stage next month.

Among new features to be incorporated is a temporary exhibition area. It will initially recount the story of Welsh rugby with artefacts and information panels, though the facility will be adaptable to carry material about other subjects in the future.

“Operated by sequence timers, this facility will allow for out-of-hours promotional footage to be viewed from the street and [it will also] provide the opportunity for vendor-funded footage to be considered,” he says.

Clients have no idea how to write, and here’s all the proof you need…

Fuel rushes in with Wow factor