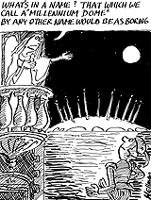 This article may lay me open to the charge of prejudice. It’s about the Dome which, apart from a preliminary encounter with the adjacent Skyscape (DW 28 January), I have not yet visited.

Why then dare to write about it? Well… the business of marketing communications is largely concerned with prejudice. Strip the term of its emotional baggage and we are talking about pre-judging. An advertiser attempts to persuade an audience favourably to pre-judge its brand.

Not all the stimuli are under the advertiser’s control. With something as high profile as the Dome the media dominates and, from January, word of mouth contributed significantly. Nevertheless, at the outset, the advertiser is in charge and presumably masterminding the communications and that means, above all, crafting a few key words which sum up the enterprise.

Creative director Dave Trott demands that an advertising brief should comprise “one word and a thousand facts”. Too many briefs consist of worthy facts with nowhere to go. Trott asks for a leading word which gives them direction.

If the Dome’s critics have hindsight, its progenitors lacked vision. There were ideas aplenty but where was the single-minded proposition, the focus, the one word? “Experience” could have been a runner but that was confined to the name of the company.

What you call something is important. (There’s a statement of the obvious – but then it’s the obvious which often gets ignored.) Compare the two global broadcast services of the US and UK: the Voice of America and the World Service of the BBC. The words differentiate the two services and reflect the philosophy and personality of each.

Similarly, compare the names of two enterprises a half century apart. The Festival of Britain is a promise, the Dome is a building. The first leaves you in no doubt what it is about. The second conveys virtually nothing.

The Dome’s communications, both publicity and media comment, concentrated on the building, the expense, difficulties, arguments, size, wonder – as in “I wonder if it’ll be finished in time?” To which the answer was a resounding yes.

Up river, meanwhile, is another landmark, not finished on time but a popular success. There is another difference: the name. Not The Wheel but The London Eye. Not the thing, but what the thing enables you to do; see an amazing amount of the capital. The Wheel is the product. The London Eye is the brand. The Dome serves as both to the detriment of the latter. Transmuting product into brand is what marketing is about and what creative people get paid for, their imagination.

For too long the punter had to use his or her imagination to piece together the components of the Dome and to divine a purpose. The official name is the Millennium Dome. So we know what it’s meant to commemorate. But in what way exactly?

There was no such confusion in 1951. The Festival of Britain also had a dome, the Dome of Discovery. A promise. A brand. The festival celebrated the first year of the second half of the century – unlike the premature ejaculation of the current celebrations. And it celebrated the potential of Britain. This was symbolised in the cloud-capped Skylon. We had recently emerged from war. London was tired, drab, rationed but the festival catalysed confidence and harnessed hope.

The Times columnist Libby Purves attributes the Dome’s lack of excitement to the public sector being put in charge of something for which it is manifestly unsuitable – the provision of fun. Hence the belated arrival of Disneyland. Yet the public sector ran the Festival of Britain. That was educational, informative, entertaining – Reith’s trinity, still the cornerstone of the BBC – and fun. If not riotously on the South Bank site itself, then up river at Battersea Park with its pleasure gardens, statuary, Ronald Searle creations and fun fair, London’s answer to Copenhagen’s Tivoli.

Peter Mandelson betrayed a wish to emulate his grandfather Herbert Morrison, the presiding genius of the festival. If only someone had emulated Morrison’s single-minded vision and employed the equivalent of Gerald Barry, a creative supremo. What the festival had, and the Dome to date lacks, is focus.

I shall visit the Dome and no doubt shed a few prejudices. But I wonder how many people will go despite, rather than because of, their pre-judging.

I wish it well. I wish it crowds. There were crowds in 1951. I know. I was a turnstile operator.

On your marks, get digital