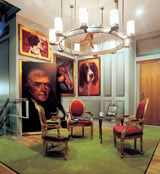 When media company Naked Communications decided to reinvent their warehouse-based headquarters, it turned to Household to give the space a quirky, yet traditional feel, with an added twist. Clare Dowdy takes a look around

What to do with a business that wants to grow up, but whose office is peppered with kitsch 1970s toys? Reinvent the space as a stately home, of course.

That was the route Household took when it picked up the redesign and expansion brief from strategic media company Naked Communications. Based in London’s Clerkenwell, six-year-old Naked is seen as something of a pioneer in its ‘media-neutral’ field and now has outposts in Amsterdam, Paris, Sydney, New York and Oslo. The business is peopled with what founding partner John Harlow describes as ‘brilliant misfits’, and needs a headquarters to reflect that.

The space had formerly been occupied by a dotcom, and Naked’s previous interior look, by Odd Design, was a simple case of painting the breeze blocks white and strategically positioning the 1970s paraphernalia. Household’s stately home approach is about allowing the company to grow up, but without sacrificing its quirkiness. So that means that some items are not quite as they seem, either because the scale, material or context is unexpected – hence the reception area with its Household-designed, outsized Chesterfield-cum-bed-cum-coffee table and its pretend chandeliers in black. Meanwhile, two vast fabric panels, depicting a scene from a heritage tapestry, adorn the walls.

Clients like Nike, Honda, Boots the Chemists and Sony can see through to the busy office beyond the reception, and to two photographic murals on the back walls of stately home gardens, complete with elaborate topiary. From the reception area to the meeting rooms and library upstairs, the walls are decked out in faux panelling, painted in a pallid, yet tasteful grey. This was key throughout the building, according to Julie Oxberry, managing director of Household. ‘We would never have put in proper panelling, because everything here has a twist,’ she says. Household’s design philosophy was also in keeping with the project’s budget. 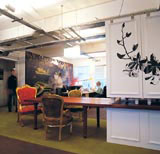 This floor, the sixth of an old lift manufacturer’s warehouse – hence the elaborate and archaic early 20th century lift – sets the scene for clients as an adventure, says Oxberry. More than likely, they will then be whisked up to a meeting room or the boardroom upstairs. The boardroom’s panelling is of a floral design, and the room is dominated by two 1930s black lacquered tables, which are placed end to end. These may smack of a stately home, but Household has paired them with some very modern white chairs.

Along the corridor, there’s what Harlow describes as the secret meeting room, which is complete with a traditional oil painting portrait, whose eyes are to be removed so that it’s possible to see into the boardroom next door. Another floor up holds the library, which has bijoux objects, such as a topiary dog and a small piano. Much of the furniture was sourced from auction houses and reclamation specialist Retrouvius. In fact, Oxberry acknowledges that a lot of Household’s input was dressing.

The designers are now planning on refitting the office area with Household-designed tables and storage. Oxberry and her team were also responsible for the design of the reception desk, which is in keeping with the boardroom tables. She also intends to reconfigure the light and airy garden room, attached to the roof terrace, as a conservatory.

Naked’s founders originally worked out of an old warship, moored on the Thames near Blackfriars Bridge. Their New York arm is based in a loft space, and Naked Amsterdam calls a canal barge home. With the new-look London office, the company is continuing its theme for less-than-corporate environments.