The Triumph Design Team has created a bike accessories collection called Sixty8, referring to the year that Triumph’s iconic Bonneville bike was launched. The range, which includes laptop bags and iPod holders, will be available from mid-April.

Former Landor Associates Milan creative director Sasha Vidakovic has designed an identity and packaging for Sandra Bugarin, a fashion and shoe designer from Belgrade, Serbia. The work was handled through his London consultancy Sasha Vidakovic Design.

Packaging for AG Barr’s Irn-Bru 32 energy drink has been designed by Leeds consultancy The Spirit Of. The Irn-Bru spin-off 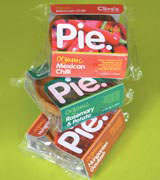 launched last month and will go head to head in the sector with Red Bull and Coca-Cola’s Relentless, and Sprite 3G.

Devon consultancy Biz-R has created an identity and range of packaging for local company Buckfast Organic Bakery’s range of vegetarian pies, which are branded as Clive’s (pictured). 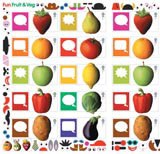 MoreySmith has completed the expansion of the Commonwealth Club premises in Northumberland Avenue, London. Appointed by The Royal Commonwealth Society, the consultancy has designed the members’ area and conference suite facility (DW 3 February 2005).

Foster and Partners has unveiled its design for the Moscow City Tower, set to become the tallest building in Europe. The mixed-use tower will have an ‘energy cycle’ of heated water as part of its sustainable architecture.

Royal Mail is to relaunch the Johnson Bank-designed Fruit & Veg interactive stamps as an A4 landscape sheet (pictured). The original set was published in 2004 and won the Design Week Awards Best of Show and a D&AD Gold award (DW 3 June 2004).