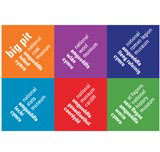 A visual identity and naming programme for National Museum Wales and six of the museums that fall under its remit is about to be launched, following a redesign by consultancy Openmind.

Openmind was appointed in August 2004, following a four-way pitch against Peter Gill Associates, Departures and Jane Wentworth. The four were selected from a longlist of 12 that included several Welsh groups and tourism branding specialists, says Openmind client partner Philippa Emery.

The work begins its roll-out from tomorrow, and communications director at National Museum Wales Robin Gwyn says the identity is a ‘visual manifestation’ of the organisation’s realignment of its vision and purpose for the coming 15 years.

‘The [work] reflects a change in the substance of where we are going,’ says Gwyn.

Name changes, such as the National History Museum – which was previously known as the Museum of Welsh Life – go beyond a need for clarification, to reflect the organisation’s new curatorial strategy, he explains.

Exhibition specialists may also profit from these latest developments. Both the National History Museum and National Museum Cardiff have been earmarked for further investment to the physical experience.

According to Gwyn, naming and visual identity were previously ‘very old fashioned and Victorian looking’, and reinforced stereotypes of museums as ‘dry and filled with dusty glass cases’. There was a need for a more modern interpretation and a device that clearly linked the museums as part of a group.

‘We’re trying to achieve two key objectives,’ he says. ‘We’re looking for a professional identity for the parent body that helps engage key funding bodies like the Welsh National Assembly; and also an attractive identity for each museum that can be used to link all the sites and promote the family of museums.’

Openmind creative director Peter Smith says the creative solution was heavily influenced by the need to simplify the naming of the various museums and by facing the challenge of operating bilingually in Welsh and English.

‘The language has become the marque,’ he explains. ‘We’ve used a strong typographic style and made the language the hero. We’re seeing the need to use both languages as a solution, rather than a problem.’

The typographical arrangement of the logo was created to allow some long names to be read more easily and help clearly identify the different museum offers, adds Smith.

A new colour palette was also introduced to help distinguish between the museums and add a more vibrant and modern element to the identity.

The time taken to complete the project can be attributed to a lengthy consultation process, adds Emery. ‘The museums are such an institution in Wales that any change was likely to be controversial. We needed to make sure it would sit happily with internal audiences and other stakeholders.’

• National Museum Cardiff – has been earmarked for further development

Jowell sets out plans for a creative UK

‘Business as usual’ at Body Shop