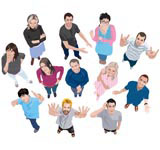 Airside’s balance between idealism and commercialism is paying off, with a raft of clients and top place as Best of Show in the Design Week Awards. Liz Farrelly asks members about their future plans

‘In London you meet lots of creative people who have a job and then do their own stuff outside of work. At Airside we can do all that at work,’ explains Anne Brassier, studio manager at Airside and creator of Stitches, a posse of woolly, knitted creators, who live behind her desk and tout for new homes via Airside’s on-line shop.

Managing director Nat Hunter adds, ‘The point of Airside is to be totally idealistic, but to make proper money.’ With a staff of 12, a bright, funky office in Islington that’s about to double in size and a client list including Orange, Coca-Cola and the Crafts Council, Airside’s left-field approach is paying off.

Set up in 1998 by Fred Deakin, Alex Maclean and Hunter – who met at university in Edinburgh and later at London’s Royal College of Art – Airside began life as a loose group of like-minded freelances, a collective that worked and played together. ‘But we looked like a company when clients came in,’ Hunter recalls. Within a year, their accountant was bemoaning their convoluted invoicing procedure, which attempted to retain each member’s independence while feeding a collective studio pot, and insisted they become a ‘real’ company. With expertise in computer interface design, psychology, graphics, architecture, music and copywriting, Airside rode the dot com boom designing websites.

‘We have excellent technical skills’, explains Hunter, ‘but the ideas come first. We see tools as secondary. We’re not interested in gimmicks – we want to connect with our audience, to get a human response, whether it’s with technology or knitting.’

The name Airside came from a copy of the Oxford Dictionary of New Words, trawled by Hunter and Maclean for something that was catchy, but not yet a URL. ‘Even in 1997 a lot of words had been bought up,’ explains Hunter. ‘The choice was important because it needed to be ambiguous enough to cover all our activities – a club night, a clothing label and a design studio.’ And, in case you didn’t know, ‘airside’ is the hinterland you inhabit after passing through passport control.

That entrepreneurial approach was crucial, not only to Airside’s financial survival, but also to public perception and its collective ethic. ‘We’ve never been about money-chasing. It’s more important to enjoy what you do,’ explains Hunter, adding that in the early days it was Deakin who was happiest to take risks, promoting clubs, launching a band – Lemon Jelly – and setting up the Tee-Shirt Club, which supplies subscribers with regular designs by a coterie of creative names.

Maclean recalls thinking at the time, ‘Who’d be crazy enough to pay for designs they hadn’t seen?’ But Airside’s commissioning policy was endorsement enough – the club is still thriving.

Brassier joined the original members in 2001, initially as a book-keeper, and Airside ‘grew slowly’, taking on a new employee each year. By 2003, however, the group was in trouble. As she recalls, ‘Alex and Nat were the most stressed-out people,’ and the multiple hat-wearing had to stop. 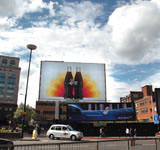 The other hurdle to leap was working for the advertising industry. Hunter and Maclean admit they’d had a phobia about advertising, thinking that the extra layer between themselves and a client would water down any idea until it was ruined. ‘But we needed to get work in the corporate world,’ recalls Hunter. ‘We’ve found people at Mother, BBH and Saatchi that we can work really well with. They’re refreshed by us, and we’ve had such nice jobs, plus the money’s good.’

With animated television ads for Orange and Surf under its belt, and its ability to produce ‘cross-media’ solutions – from websites, to T-shirts, mobile phone animations, print and packaging – Airside is in the enviable position of being able to maintain its creativity and be taken seriously as a technical wizard. Looking to the future, the team is keen to ‘crack the world of corporate design,’ admits Hunter. ‘We want to work directly with clients, building relationships and bringing them ideas.’

Maclean has the last word. ‘The aim is to find a balance between self-initiated projects and working with the client, the digital and the real world,’ he says.