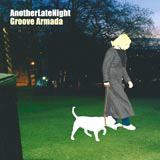 Airside has been commissioned by Austin Wilde at Whoa to design the CD packaging for a series of four, ‘post club’ compilation CD’s, entitled ‘Another Late Night’.

The four album covers have been designed as a collectors’ series and, when laid next to each other in release date order, show an early morning panoramic view of London from a park overlooking the city.

Each CD features a drawing of a character going about their early morning routine. Characters include a jogger, a milkman and girl walking her dog in her slippers. Artwork and photography is by Airside. The first in the series is available on Azuli Records on 27 May and will feature a mix of tracks selected by Groove Armada. Further compilations by Tony Guevro, Sly & Robbie and Mr Scruff will follow.

HMKM helps to put Ravel a step ahead of its rivals