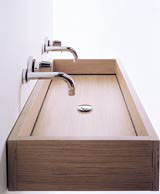 If you thought bathroom design meant knitted flamenco dancer toilet roll covers, soap-on-a-rope and a goldfish shower curtain, think again. Designers are experimenting with material, form and function, and questioning the design principles of objects many take for granted.

In the 21st century bathroom, leather-clad sinks and toilets could well sit alongside velcro-backed toothbrushes, transparent towel rails and remotely operated showers. And, with Marco Zito’s toilet roll holder, you may never run out of loo paper again.

Italian bathroom specialist Agape has recently collaborated with designers, including Benedini Associati, Claudio La Viola and Marco Zito, on a range of bathroom products. Benedini unveiled its plywood sink and bath Woodline, the result of research into marine uses of the material, at this year’s Milan Furniture Fair.

La Viola has created a series of stainless steel accessories, including towel rails and toilet roll holders. And the humble paper clip inspired Zito to design Diapason, a toilet roll holder capable of taking several rolls at once.

A collaboration between Studio Levien founder Robin Levien and bathroom company Sottini has resulted in a contemporary brand, Philosophy, which launched earlier this year. Levien has created a sink, bath and toilet in a series of unusual finishes, including leather, maplewood and stainless steel.

Seymour Powell director Adrian Caroen has created a shower for Aqualisa designed to remove the bulky workings outside the cubicle, leaving more room inside. The thermostatic shower, Quartz, is powered remotely via a data cable.

Four international designers have attempted to map out the future of bathroom design for fittings manufacturer Dornbracht. Rodolfo Dordoni, Jean Marie Massaud, Christophe Pillet and Claudio Silvestrin were asked to create their ‘personal concept of a bathroom’, and the results were unveiled in Milan.

Dordoni has addressed shelving problems with two wall-mounted units incorporating accessories such as a mirror, lamp and small medicine cabinet. And in Turn Around, he has designed a free-standing, directional mirror with shelving on the reverse.

Pillet has designed a three-pronged towel and clothes hanger, Three Ways, and Space Bar, wall-mounted or floor-standing cabinets which can be mounted horizontally or vertically.

Monolith, designed by Silvestrin, is architectural in feel, reflecting his work. The structure features two ‘towers’ joined by a metallic bar, which doubles as a towel rail. One tower incorporates shelf space and a foldable chair, and the second features a giant mirror.

Italian product design network Virtuallydesign.com, set up last year, has created a range of off-the-wall bathroom products. Ron Arad’s Hanger is essentially a wall-mounted clothes hanger which functions as a towel hook or clothes hanger and can be hung either way up.

Other innovations include disposable soap ‘sticks’ by Fabio Bortolani and Ermanno Righi; a stool incorporating a drawer by Gabriele Pezzini; Marta Laudani and Marco Romanelli’s wall cabinet with chalk-board front; a PVC and velcro wall-mounted toothbrush holder; and an unusual glass container featuring a flip-top mirror and designed by Kazuyo Komoda.

Traditionally a kitchen products manufacturer, Alessi has branched out into bathrooms for the first time this year with Il Bagno Alessi, unveiled in Milan.

Stefano Giovannoni has designed a range of products and accessories, from baths and taps to mirrors and lighting systems, working in collaboration with three international manufacturers: Laufen, Oras and Inda.