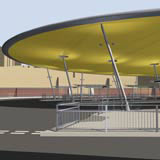 Jestico & Whiles is tackling bus travel in London head on with a scheme for one of the capital’s busiest bus stations, Hammersmith, set for completion in early 2005.

The project involves the construction of an interim bus station to be in use for ‘two to seven years’ from 2005, explains Jestico & Whiles associate Andy Costa, who is leading the work.

This will be followed by a permanent facility, the design of which is in its ‘early stages’, says Costa. ‘Broad concepts are being worked on at the moment, and we aim to start work properly in the New Year,’ he adds.

The projects aim to cater for the growing number of bus passengers in London, which are predicted to increase by 40 per cent by 2011, as commuters shift their focus away from beleaguered London Underground services.

An angled, elliptical canopy wrapped in yellow tensile fabric will span the bus islands offering protection from the elements. It is designed to be partly dismantled while the permanent station is being constructed.

Jestico & Whiles presented its concepts for the interim scheme to the client, the London Borough of Hammersmith and Fulham, three months ago and is now awaiting final sign-off, expected in the next month.

Hammersmith’s existing bus facility will remain in use until 2005.