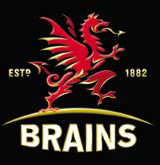 Wales’ largest independent brewer, SA Brain & Co, has fermented a new look, with design by Turner Duckworth, to capitalise on national confidence in the principality and boost its brand profile in England.

A redesigned logo will be applied this month to signage at 220 Brains pubs, as well as appearing on delivery trucks, packaging and point-of-sale material.

While the ‘home market’ will be Brains’ main focus, the company is keen to increase its distribution of Brains SA, its premium product, through national pub operators and supermarkets across the UK, says non-executive director/ marketing John Rhys.

According to Turner Duckworth creative director Bruce Duckworth, Cardiff-based Brains is keen to tap into the positive mood generated in Wales by initiatives like the Welsh Assembly and the Millennium Stadium.

Regional provenance is an important factor in the marketing of independent brewers and Brains wants to create a similar appeal to that which Fullers has acquired with London Pride, Duckworth adds.

Although Brains has an iconic presence in Wales, it experiences a ‘mixed reaction’ to its brand from some consumers, he says.

The red Welsh dragon logo has been retained, but flipped around so that it faces to the right – this is because people read from left to right, but also as it denotes ‘looking forwards’ and ‘towards England’, Duckworth adds.

The consultancy was appointed in middle of last year, says Rhys, after a credentials process involving three other groups.