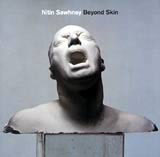 The cover of musician Nitin Sawhney’s latest CD is intended to portray the pain and difficulty he felt growing up as an Indian in east London, says Peter Chadwick, art director of Zip Design, which created the cover. The issues of being a British Asian are explored throughout the album, Beyond Skin, which is released by Outcaste Records. Artist John Schoonrad created a white plaster bust of Sawhney, which was then shot by photographer Solve Sundsbo.