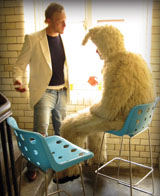 Loft decided, once the Robin Day ranges had launched (Polo was first, in 2001), to reassess where it was heading. It got rid of ‘the expensive, European stuff’ it was selling, which ‘didn’t have a great deal of integrity’, and started creating its own pieces.

Enter the Rong range, which Bakewell started on earlier this year after joining Loft full-time. The aim, he says, was to attract the sort of bulk orders and heavy usage associated with schools, colleges and big architectural projects.

To fill the gaps in the Day ranges, Bakewell designed a simple table and a sofa, with a twist. The former has the ‘fundamentals’ of any table, but is designed off-centre, with a slightly skewed top. The cube sofa has ‘classical proportions’, but is similarly off-set, with a backwards tilt thanks to legs that are longer at the front than they are at the back. Prototypes were designed quickly, in time for 100% Design.

‘Rong is aimed at both contract and domestic markets, so it had to be no-nonsense. We pared down the design, so it could be manufactured by anyone. But we wanted to add a bit of humour, too,’ says Bakewell. What does Day think of the new products? ‘He’s not actually seen them yet, so I’m biting my nails,’ says Bakewell. ‘But he’s seen the ads we did, which I’m not sure he got first time round.’

Ah yes, the ads. Loft may want to sit alongside the big British furniture names, but it also wants to inject humour into its positioning, and reject the ‘stuffiness’ that afflicts its competitors’ marketing material. One Loft ad, for Polo, has Bakewell’s brother in a rabbit costume, nonchalantly chatting to a guy in a stairwell. It’s surreal, quirky and stands out a mile.

Bakewell’s life has revolved around 100% Design all year. Once it’s over, and the orders for Rong are hopefully pouring in, he’ll expand his role, communicating what Loft stands for. ‘We’ve all ploughed everything into our change of direction,’ he says. ‘It’s almost like starting from scratch. We’re all a bit broke, and we’ve got a lot hanging on 100%.’ But that’s because they’ve set such high standards. ‘By Christmas, we want to be liaising with big specifiers, and we want to double our profits by mid-2005.’

He’s also enjoying owning a home for the first time, something he admits he’d never be able to afford in London. ‘The quality of life in Leeds is incredible. It gives you energy, not having to commute for two hours each day. I can cycle to work in five minutes,’ he says.

Will Loft be turning to other big names in the future? ‘The name Robin Day has helped us enormously. We’re going to see what happens. I mean, my name isn’t well known yet, but…

‘People often ask us how old we are, and they’re surprised we’re so young because we’ve got so much knowledge of the industry.’

On confidence alone, Loft could take over the world, but it’s starting with the British furniture design industry. First things first.

Raise a glass to the past