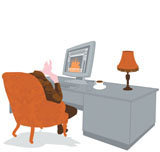 Maggie Hodgetts, head of graphic design at Waitrose, has had similar problems in the past: like Dyson, Waitrose is based far from the attractive energy of London, in Bracknell. ‘It is difficult to recruit. Bracknell is not very glamorous and it’s difficult to get to. The stigma with in-house working is that the work is all the same. But you gain a much deeper understanding of a brand working in-house, and you can often be more influential,’ Hodgetts believes.

Her in-house team of six designers undertakes around 20 per cent of the graphic design work, the majority of which is carried out by several external consultancies. Waitrose has no fixed, formal roster, according to Hodgetts, but works regularly with, among others, Lewis Moberly, Carter Wong Tomlin, Davies Hall, Interbrand and individuals such as Richard Lelan and Daryl Ireland. Each has different skills suitable for different jobs, she says.

In the wider market, recruitment has been buoyant in all sectors since the start of the year, believes Carrahar. ‘But, as always, we lack good candidates. The best designers won’t call us, as they don’t need to. They find work through word of mouth and contacts – they all talk to each other.’

It’s a freelance market at the moment, Vicary explains. ‘It’s a reaction against the recession of the past few years, the crazy hours and lack of pay rises. People are trying the freelance route, and enjoying the lack of commitment.’

But all it will take are a few quiet months, she says, and people will begin to look for full- time roles again. Gray agrees. She says it’s a ‘candidate-driven’ market, with a shortage of good people.

Crawford sums up the state of the industry in general. ‘There is some cracking talent around, and also some very interesting start-ups giving established consultancies a tough time, who need to resource their successes,’ she says. And that’s got to be good news all round.

â€¢ You can get under the skin of a brand

â€¢ Can have stigma attached

â€¢ At the client’s beck and call

â€¢ Can get tied up with unpaid pitches

â€¢ Lots of work around at present

â€¢ Work to own timetable and lifestyle

â€¢ Have to constantly market yourself