When Damilola Marcus and Seyi Olusanya started Lagos-based Dá Design Studio in 2015, they say there was a lack of “authenticity in the way brands were presented”. At the time, brands were not as conscious of their design choices or catering to international audiences, though Olunsanya singles out Paystack as an exception. The studio created the branding for the payment app when it started, and since then, he says that at least twenty Nigerian tech brands have launched — all needing “well thought-out brand identities”.

The tech boom has prompted more interest in creating coherent identities though design has long been viewed as an unnecessary cost, according to the duo. But as Nigeria creates a more international output, good design is more neccessary than ever. Identities need to speak not just to Nigerians but also Ghanians, South Africans, as well as those in San Francisco.

This leads the designers back to the question of “authenticity”. Marcus calls it a “battle” between a classic Nigerian style and international, more “formal” considerations. The archetypal visual language can be seen everywhere in the country’s landscape, from the colour schemes of public buses to the exuberance of posters produced for Nollywood (Nigeria’s film industry). The prevailing aesthetic is “loud”, they say, but it also works. In a hugely commercial culture, people have learned how to grab people’s attention. The studio works to update these classic Nigerian tropes and refine them, instead of reducing them simply to “bad design” (an after-effect of Western ideals, the designers say).

This tension is distilled in the studio’s Danfo project, a typeface inspired by a local transportation service called the Danfo bus. Taking inspiration from the “unmistakable” black and yellow identity and the “notoriety” of the service, the studio created the Danfo typeface which seeks to harness the energy and sentimentality of the transportation system.

It’s an example of the studio taking an element from the Nigerian landscape and applying it to a more design-led setting. “We wanted to see how we could fit into that space and find out how our narrative can add to an international conversation about design,” Marcus says. The enthusiastic response from Nigerian publications and companies has shown a desire for this kind of refinement, they say.

“They still see the Western aesthetic as the standard”

Despite a growing interest in the studio’s output, Olunsanya says that companies can be resistant, especially when “they still see the Western aesthetic as the standard”. “What we do is to try to convert their thinking by adding some Nigerian elements to the identity,” he says. He expects this to take five to ten years for Nigerian brands to take this fully on board.

One brand that attempted to achieve this straightaway is Pedro’s, billed as the country’s “first craft spirit”. It was started by Lola Pedro, a trend analyst who lived and studied in London before coming to Lagos around seven years ago. The country is used to Western imports that carry higher prices, such as Vodka, Gin and in flashy nightclubs, Champagne. However, while she was staying in the south of Nigeria, she found an indigenous drink — an unrefined spirit made from palm sap called Ogogoru. Inspired by the revival of spirits like Gin, Pedro saw an opportunity to market the drink in Nigeria’s cities and particularly its former capital, Lagos.

Traditionally viewed as “airy fairy” in Nigeria, design was instrumental in selling the drink in “cosmopolitan” Lagos, according to Pedro. Nigeria, she echoes, is still led by Western ideals and marketing an indigenous drink would be a hard-sell in the premium sectors. Pedro worked with French designer Guillaume Jounet Lacoste on the branding, and the visuals are rooted in Nigerian symbology. The “riverine blue” colour scheme is a nod to the coastal and riverine regions and tribes in West and Central Africa. The white forms on the label are inspired by Nsibidi, an indigenous system of symbols from South Eastern Nigeria. The branding seems to have worked: the spirit’s batches sell out and it’s become a mainstay at parties in the city, Pedro says.

Now there is a more design-conscious movement across the country, including an “Afro-Scandi” style. And while some of these trends are dislocated from their native Nigeria, she is heartened that people are taking design more seriously. “Now people are doing stuff that make me feel like I’m back in London — but with an African twist.” 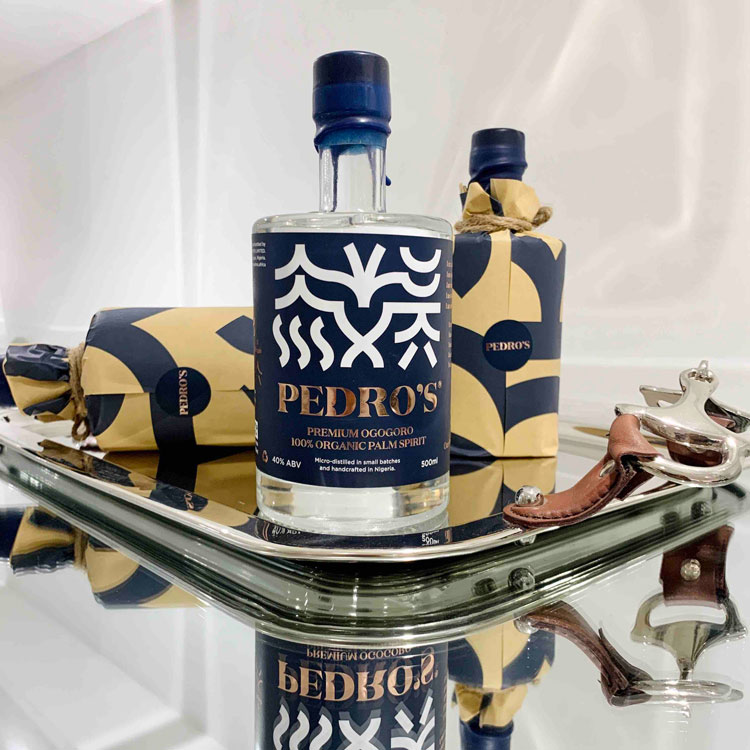 “One step at a time”

Dá Design Studio and Pedro paint an exciting view of Nigeria’s creative industry. It is also a nascent one. Designers communicate with memes and through Slack channels, but there is so far no overarching design organisation. There is some growing formality in this area; an organisation for interior designers, as well as a recently-launched Design Week Lagos which will be held virtually this year. Marcus does not think that a formal design body will be established anytime soon.

She attributes this to a lack of awareness of design in the country. While people may appreciate the visual aspects of Nigerian culture, they don’t necessarily see them as design. “Design is everywhere here, people just don’t see it as design,” she adds. Olusanya points out that this extends beyond graphic design into sectors such as product innovation. He points to the market vendors who have come up with “inventive” ways to store and sell their goods — using heat-proof materials, for example.

People will become more aware of these things, he says, but it’s about taking it “one step at a time”. “We don’t have all the answers right now,” he adds.

Creative education in Nigeria has not been progressing at the same rate as the industry, designers tell us. Bolanle Banwo, a brand designer in Lagos, says that although she was always interested in visual arts, she studied communication at university level as there was no graphic design option. While this helped her to see the value of strategy, she did not feel “passionately” about it, and she later shifted into visual work at a branding agency.

Seeing a “gap” in the education market, she set up the Geneza School of Design, an online platform which teaches the basics of design from beginners to intermediates. The courses began a year ago, when in-person lessons were possible. Lockdown has resulted in a shift online, and while that might open up a wider audience, Banwo says she misses the real-life teaching experience.

The courses are skills-based, teaching the ropes of Photoshop to lessons in UI (website-building is a key concern for brands, Banwo adds). There is also a course about more holistic brand design, which covers the essentials like logos and guidelines. Her aim is to equip a new generation with design skills so that they can work in the industry where the skills will hopefully be more valued.

“The mission is simple”

Banwo has been asked to speak at schools to show that designers can have successful careers in Nigeria. However, she says the education system is too slow-moving and “rigid” to create a more in-depth design education course at the moment. That’s why the focus of her courses remains on skills — from there, a more robust design education might follow. She hopes to speak to the government about making design part of the curriculum so that it can be seen as important as other revered industries such as medicine and computer programming.

Banwo works with a small team in an industry that can be resistant to change. Realising that the design and technology industry is male-dominated, she set up the Female Designer Movement at the start of 2018 to train women in graphic design. “The mission is simple,” according to the website, “to expand opportunity for as many women as possible by training and empowering them with a graphic design skillset”. The training is completely free, and over 1,500 women have been trained so far, Banwo says.

“Sometimes I feel like a drop in the ocean,” she says. “But everyday I’m growing, and people are becoming more aware of the importance of design.”

Behind Mississippi’s “transparent” process to redesign its state flag