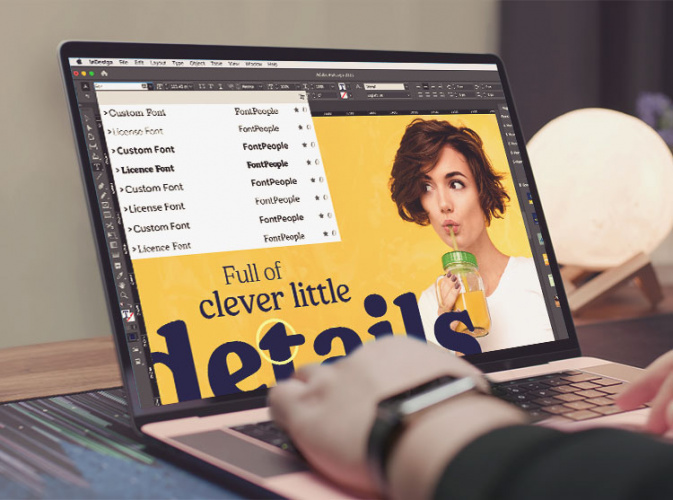 Licensing a font for a brand is like hiring a car: you’re paying for the privilege of using it for a period of time, and it can look and feel great – but it’s never truly yours.

Similarly there’s no exclusivity of use or creative control over how a licensed font expresses the nuances of the brand it is hired for.

There’s also the thorny issue that if a business becomes more successful and web traffic rockets, the font bill will likely rocket alongside it. As well as the opportunity to express a brand’s distinctive personality through type, commissioning a custom font can solve many of these practical concerns too.

“There are no bandwidth restrictions,” explains Jason Harcombe, founder of full-service independent foundry FontPeople. “If a website starts with 500,000 views and suddenly starts getting five million, you don’t have to pay an uplift in license.”

“Once created, it becomes the property of whoever paid for it,” he continues. “You can send it to whoever you like – third parties don’t need their own licenses. And you have full design control to add another weight, change characters, or add Greek or Cyrillic, for instance.”

It may seem like the best of all worlds, but a custom typeface is a significant investment of both time and money. So at what point does it become the most cost-effective choice, as well as the most creatively desirable one?

For Harcombe, the threshold to start considering a custom font as a commercially viable option is when the bill for licensing the font of your choice clocks in at around £10,000.

Hitting that threshold will be easier in some circumstances than others. “With some foundries, you might be paying upwards of £500 just for a desktop license. Reaching £10k on that pricing structure wouldn’t be difficult,” he says. “Weigh up what typeface you want to work with, price accordingly, and then find out what your cut-off point is.”

If it would cost £10k to licence a font for five years, spending £12k on something bespoke that you own forever suddenly seems much more attractive. “If you go down the licensing route, no matter how much you pay, there are restrictions in place,” says Harcombe. “In many cases, even if you pay for modifications to an existing font, you’re still only licensing it. And then you’re paying twice.”

It may seem like a no-brainer when you hit that all-important budget threshold, but the reality is that font licensing is all-too-often one of the last things on the agenda. As a result, the option might be dead in the water before you even start.

“Often someone chooses a font, it’s signed off by the client as part of the final design, and it’s only at the end that they realise they’ll be lumbered with a £15-20k bill to use it,” says Harcombe. “No one scoped it out properly, but it needs to go live within three weeks so there’s no other choice.”

FontPeople takes an average of 4-6 weeks to develop a single weight of a custom font, from design right through to production. But without sufficient forward-planning, there isn’t time to take advantage of the benefits. “In most cases, there’s no time to sit there and wait for it to be developed,” says Harcombe. Once everyone has committed to a deadline, bumping it by two months just isn’t possible.

The solution is simple: “Bring planning of typefaces to the front of the process,” is his advice. “Scope out both options at the outset and weigh up the pros and cons without being constrained by time and budget in the last five minutes.”

If you need multiple weights of a custom font, it becomes much more time efficient: a single weight might take a couple of months, but Harcombe adds that six weights could be completed in less than 10 weeks.

“Nowadays, font development is all done with masters,” he explains. “It’s not a case of starting with Regular, putting weight on to get to Bold, and taking some off to get Thin. To plan a family, you create the Thin master and the Bold master, then automatically interpolate the versions in between.”

Although each master could cost between £12-15k, automating those middle stages suddenly makes a larger family much more cost effective – provided you have the necessary time built into the project schedule, of course.

In the case of a huge multinational organisation with tens of thousands of staff, multiple apps and websites and page views in the billions, licensing an existing typeface will cost a fortune. For global brands, it’s actually cheaper to commission a custom font that resembles another on the market.

As Harcombe explains, there’s no copyright in the outline of a font – only the software and the name are protected. Shell and Louis Vuitton both use a proprietary font based on Futura, for instance, while H&M has its own version of Didot.

Despite the potential cost savings, however, Harcombe’s advice is to focus on the creative opportunity first: duplicating the look and feel of something already on the market may be technically and legally possible, but it’s a missed opportunity for expressing a brand through something distinctive.

Forward-planning is everything: not just in the context of the project, but in terms of the font’s longer-term use within the business. Ultimately, a custom font is an investment. “If you’re going to stick with this typeface for more than five years, it may be better to lay the cost down upfront and then write it off over that period,” reasons Harcombe. “But if you plan to rebrand again in a couple of years, a licensed font will do you for that long.”

“It’s about longevity,” he concludes. “A rebrand is about reinvigorating something, reinventing it from the ground up. You don’t need to just choose a font off the shelf.”

Why gender stereotypes in typefaces can stifle creativity