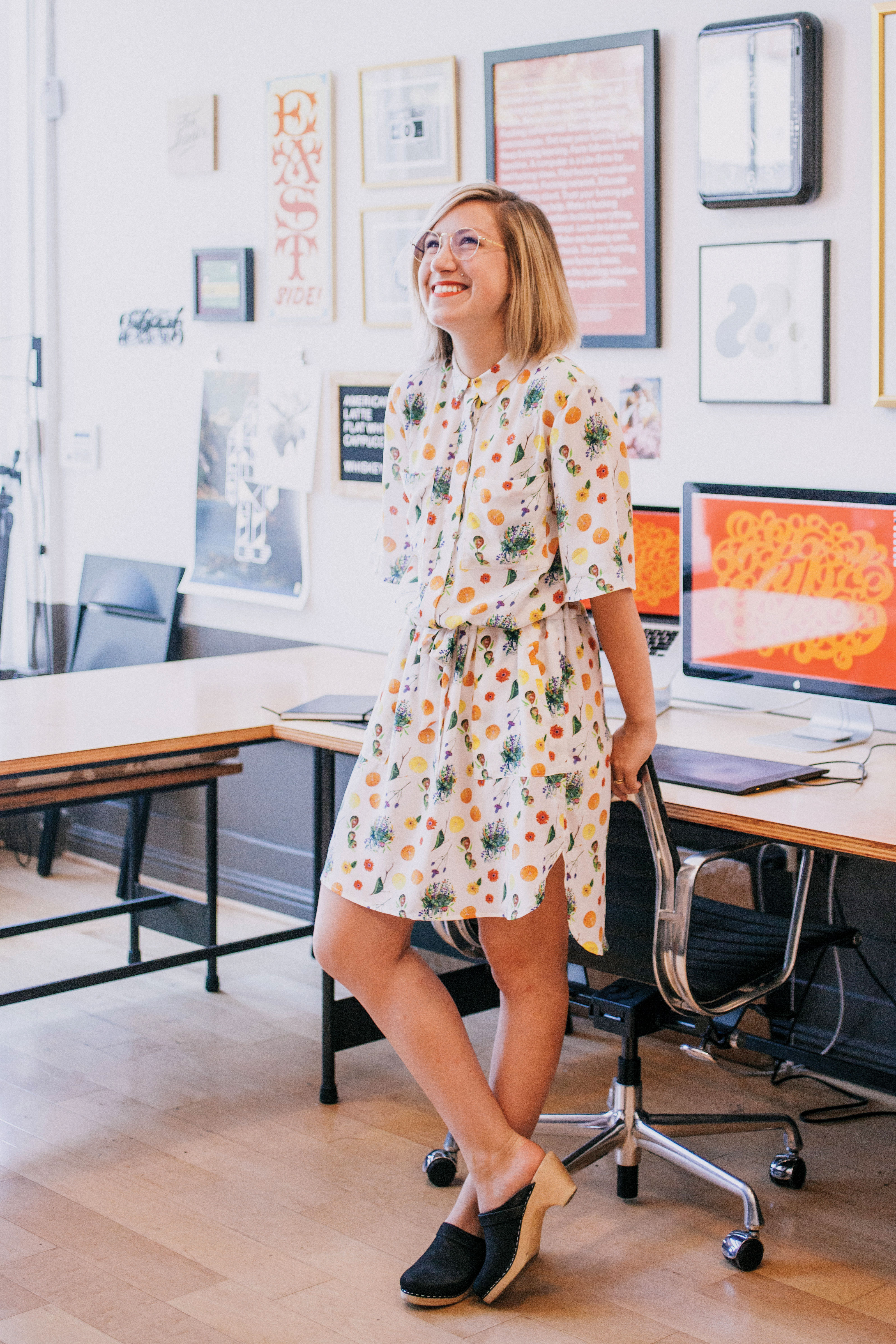 Jessica Hische has a broad portfolio of lettering projects, which include type for Wes Anderson’s Moonrise Kingdom, drawing the book cover of Dave Eggers’ The Circle, lettering for a Starbucks campaign – as well as designing many fonts and logos. (You can learn about her best tips here). Now she’s turning her hand to children’s books so we caught up with her to find out more.

DW: Can you tell us a bit about the inspiration for and the idea behind the book?

JH: Tomorrow I’ll Be Brave was inspired by a few things — first and foremost, from reading to my daughter when she was really small, and our bottomless need for good bedtime books. We would read 6-10 books a night, and she would have brief but intense love affairs with individual books and then be bored and need more. As I was reading, I definitely noticed that most of the books fell into one of three major categories: what I would call “goodnight objects” (inspired by Goodnight Moon); ‘bedtime routine reinforcement’ (a strung-out parent’s best friend); and ‘parent cry’ books (which are usually gifts from your own parents about the beauty of parenthood). I didn’t see a lot of books about what feels like the most important bedtime behavior to reinforce — self-reflection and setting intentions for the next day.

A small child can grasp “grown up” concepts

I think adults underestimate kids sometimes, and that a small child has the ability to grasp some very ‘grown-up’ concepts. People like writer and children’s television show host Fred Rogers understood this— he really gave children the space to feel and examine their emotions, encouraging them to not only seek an understanding of the world around them but within their own heads and hearts. I’m really a believer that if you can understand yourself, know and accept your strengths and limitations, that you’re capable of so much more than you could ever imagine. Part of that though, is being able to forgive yourself for the things that you struggle with or get wrong.

I thought about all the pressure I felt as a kid to ‘be perfect’ — almost all of it coming from within me, not from my parents or teachers. I can’t tell you how many pieces of artwork I abandoned because I ‘ruined them’ with a slight imperfection. How discouraged I was from trying out new activities because I’d never ‘get it right’. I thought about my daughter, and the standards she’ll hold herself to and the pressures she’ll feel as she grows up.

Introducing kids to the concept of self-forgiveness felt really important. A lot of adults have a hard time incorporating self-forgiveness into their lives, because we’re taught from a young age not to be ‘quitters’ and aren’t given tools to manage failure or taught how to see failure as a stepping stone to success. On first read, you might think that the book is all about aspiration and encouragement, but the most important part of the book is the very end — where the child is told it’s okay to not be everything you aspire to be all the time, and that shouldn’t stop you from trying.

DW: How does the lettering evoke the themes and messages in the book?

JH: The lettering and illustration work together and inform one another. When I first started my career as a lettering artist, it was through my work as an illustrator. Over the years my work has strayed away from illustration — still expressive, but hardly ever narrative. It was so fun to have them play together again. Sometimes the lettering is really a part of the illustration, where it becomes an underground ant colony, or a coloring book page. At other times it plays with the illustration without being a direct part of it.

DW: Did you enjoy illustrating whole scenes as well as working on the lettering?

JH: Definitely! I felt like I was reconnecting to myself in my earlier career. I think there will be a big sea change for me on the horizon doing more illustrative lettering again. It felt familiar and totally new at the same time. I felt rusty and challenged even though I was getting back to doing something I had done for so long.

DW: How do you expect children to engage with the lettering? Do you think they’ll understand the meaning of the word from the way it looks (as well as what it means when it’s read to them)?

JH: I think very small children clearly won’t be able to read the words themselves, but that seeing how expressive words can be, visually, will be really fun and potentially inspiring for them. There aren’t a ton of kids book that utilize lettering, which makes sense for reading-aged kids — when you’re working on basic letterform pattern recognition. It’s less of a stumbling block on a bedtime picture book, where there isn’t an assumption that the child will be reading the book to herself. I just love being able to introduce little kids to all the ways letters can be drawn and how you can reinforce the meaning of the words through how they’re drawn. 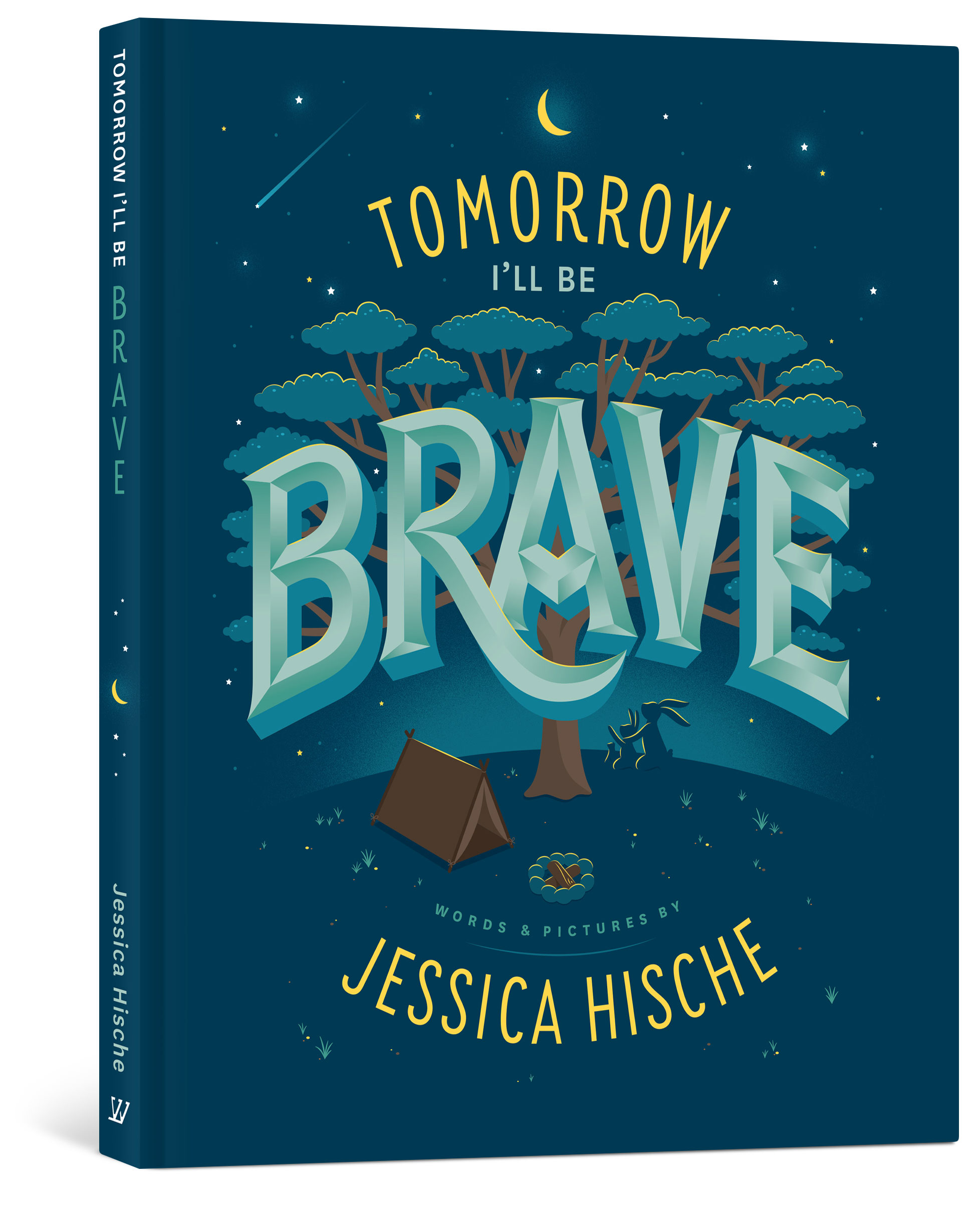 DW: What do you hope children and parents will take away from the book?

JH: I would love for the book to be a beautiful way for kids and parents to talk about their day together — that on top of being a book to read together that it could be a jumping off point for conversation and reflection. I foresee talking to my kids about ways they were ‘brave’ or ‘strong’ today or ways they hope to be ‘curious’ tomorrow. Ultimately, if anyone reading this book walks away encouraged to push themselves to try new things or believe they’re capable of being all or any of the words in the book, I will be over the moon.

Designing a website to promote better mental health in the workplace