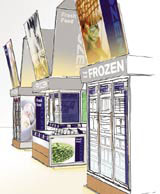 Safeway is testing the concept at two of its supermarkets – Clacton and Welwyn Garden City – which will be monitored for up to 12 weeks. If successful, the concept will roll out to other Safeway stores and possibly other chains, says Birds Eye Wall’s customer activation manager Jamie O’Brien.

‘Supermarkets need to move away from traditional faceless aisles and obscured products to capture consumers’ attention,’ he says.

The consultancy has developed ‘warmer’ finishes such as timber, light boxes with giant food close-ups, a strapline ‘frozen for freshness’ and colourful graphics for freezers.

The concept is modelled on the success of other areas within the supermarket, such as the delicatessen, bakery, butcher and fishmonger ‘zones’, Cowles adds.

Although Birds Eye Wall’s is the client, the freezer department graphics and 3D work do not carry the company’s branding.

The project is Dalziel & Pow’s first work for the Unilever-owned brand, which it won after a multi-way credentials pitch last October.