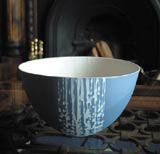 Here’s a heart-warming tale of post-Easter resurrection. Peter Kennedy, who left Tonic Design to study ceramics for three years, is working towards his degree show this June. To help his marketing effort, he’s decided to rebrand himself as Petr Weigl.

‘Just to remind you,’ writes Kennedy/Weigl helpfully. ‘My father escaped from Czechoslovakia during the Russian occupation and changed his name to Kennedy to avoid detection from the secret police. Peter is Petra in Czech, so my designer name is my real name, Petra Weigl.’

Or Petr, in fact. Perhaps Petra was too girly? Or reminiscent of 1970s Blue Peter pets? Whatever. His pots look nice, don’t they?