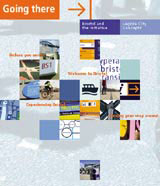 The group’s first project is a website, www.bristollegiblecity. info, for Bristol Legible City. AIG is also working on projects for Land Securities and fashion brand T19.

Seaside initiative gets decked out