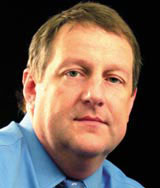 How will the hike in National Insurance contributions hit the design industry? Richard Clayton asks the question. Additional research by Maeve Hosea

A cartoon in one of the newspapers neatly summed up Gordon Brown’s seventh Budget. It showed a huge statue of Saddam Hussein falling right across the traditional ‘red box’ photo opportunity, with the Chancellor looking suitably miffed. Enough said.

The move that got the business lobby hopping mad had, of course, already come into effect. National Insurance contributions rose by 1p in the pound for both employees and employers from 6 April, though that is not felt in the pay packet until after 17 May.

The British Chambers of Commerce claims one in five companies plan to lay off staff as a result. At a time when employee overheads are a serious cost, and with margins suffering in the downturn, how do design people regard the NIC increase?

‘As with every other cost escalation at present, design buyers will not pay more to cover the increase,’ says David Jebb of David Jebb & Associates. ‘To maintain the same level of profitability, consultancies will have to produce the same gross income per £1 of overall costs as they did previously. Stepping up the battle to reduce overheads is a must. Of course, groups that don’t want to do anything will just see the increased costs come straight off their bottom line.’

‘With operating losses mounting, not least because growth in salaries has been outstripping growth in income, additional staff-related costs are unwelcome,’ says Results Business Consulting managing director Jim Surguy. ‘However, for individuals on average earnings an additional £14 a month has little demotivational effect – it’s been known about for ages anyway.

‘For companies, a 1 per cent increase in staff costs could, at the margin, be significant for large businesses. With 100 staff, 1 per cent is one person. For a ten-person business, it has no practical impact – if someone can be released (10 per cent) they should have gone already. Rather than more staff layoffs, we may see more alliances and mergers as the year progresses.’

‘Putting up NICs puts employers under more pressure,’ believes Major Players consultant Paula Carraghar. ‘The increased cost will make inroads into companies’ profit margins by pushing up their overheads. Consultancies may have to increase their fees in order to recoup this expense, therefore making them less competitive when they should be as competitive as possible.

‘It will also have a negative affect on design groups recruiting, as people are now more expensive. The Government should be trying to help employers to take on and retain staff, instead of making it more difficult.’

‘I take it as an unwelcome burden on consultancies, particularly at a time when business is already feeling the effects of a slowdown,’ says Design Business Association chief executive Deborah Dawton. ‘But it was announced in the last year’s Budget so consultancies should be prepared.’

‘We run a lean operation where staffing levels are dictated by the amount of work we have, and by [wanting] the size of company where the directors can still be directly involved in every project,’ says Blast creative director Colin Gifford. ‘While the increase is a financial blow for companies of all sizes, we have a staff number at which our group operates, below which we wouldn’t want to go.

‘[It’s something] we just have to accept. It will affect our profit margins, but not our decisions on staffing levels. [Generally,] I fear it may be the straw that breaks a few more designers’ backs at the big groups, where staff overheads are the first port of call when savings are required.

‘Most people understand you have to get the money from somewhere to pay for improvements in hospitals, education and transport,’ comments Ziggurat director Adrian Day. ‘It’s just unfortunate that the rise is coming through when the economy, and our sector in particular, is under so much pressure.

‘We’re actually quite busy just now so it won’t directly affect our staffing. Of course, taxes will always be there; the real challenge for our sector is to convince clients to recognise – and pay for – the value of the intellectual property that we bring to their businesses,’ he says.

‘Will it really matter?’ ponders Roy Powell, chief financial officer at Enterprise IG Worldwide. ‘Not many companies I know make serious financial decisions wholly on the basis of the National Insurance levy.

‘Of course, it’s an unfortunate additional burden when many [consultancies] are struggling to make ends meet. But any company who feels this charge is the trigger for widespread savings needs to look seriously at its overall cost base and make some sensible decisions based on client priorities, first and foremost. Job cuts may not be the answer.’