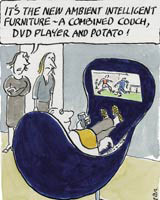 I was talking recently to a particularly lugubrious product designer. Would he be making a trip to the Milan Furniture Fair? I wished I hadn’t asked. Milan? You must be joking, he told me, launching into a monologue about the dangers of the star system to the integrity of product design.

I used to think of product and furniture designers as cousins, but this chap – let’s call him Jeremiah – appears to view his high-profile ‘designer-maker’ relatives with the sort of affection Saddam Hussein once reserved for his sons-in-law. He argues that the Wallpaperisation of interior design has hyped furniture designers out of proportion to their talents.

‘Come up with a flashy chair prototype and you’ll find interiors and style magazines touting you as a new star,’ he grumbled. ‘Design a proper product like a medical scanner that’s made in its millions and no one gives a damn.’ I could almost understand where he was coming from when I hit Cappellini’s launch party in Milan last week. It’s true that furniture’s annual trend-setting spring fair has become to furniture what Paris is to fashion.

Trophy design achieves its apogee at Cappellini. Even Jasper Morrison’s new table range and the Bouroullec brothers’ cabinet collection took second place to this year’s signal piece: Fabio Novembre’s SOS – a long black box with a gold cushioned interior combining the functionality of Dracula’s coffin with the looks of an alien birthing pod.

But while the new furniture labels are turning out some trash, product designers ignore them at their peril. As this year’s salone confirmed, product and furniture design no longer exist in separate orbits. Consumer electronics manufacturers that represent product designers’ client bedrock were more in evidence than ever before. Philips, Samsung, LG and Siemens all had special shows envisaging different aspects of ‘the house of the future’.

One force that is bringing electronics and furniture together is ‘ambient intelligence’, seen as the next step in the technology revolution that has the potential to turn every domestic object into a digital tool.

It’s no longer just a theory. Philips and Cappellini presented Paesaggi Fluidi, a collection planned for production from the autumn. This includes a bookcase-cum-TV and a bed that projects DVD images. It is, Philips design director Stefano Marzano predicts, the start of a new product category.

‘Cappellini’s business is furniture. Philips knows about technology, and that’s the combination that ambient intelligence will need,’ he told me. ‘Technology is going to come in new forms, but to work it needs the credibility and authenticity that comes from this kind of marriage.’

Siemens is on the same wavelength. It isn’t taking Marzano’s ‘convergence’ line, but it made its Milan debut with a cordless phone, co-produced by Alessi and designed by Stefano Giovannoni. It is, a Siemens spokesman says, a product targeted at design-conscious homeowners.

Jeremiah might view the Siemens/Alessi link up as cynical opportunism that robs traditional product designers of their birthright. But it’s time ‘brown goods’ designers looked to their laurels. In a mass-produced world we crave products that feel personal and distinctive, but specialism seems to have been bad for electronic designers.

With obvious exceptions such as Apple, there is a depressing saminess about electronic products. No wonder Marc Newson is following up his concept car for Ford with a mobile phone for a Japanese manufacturer. I’d love to see Morrison, Terence Woodgate, Konstantin Grcic or Ross Lovegrove inject a bit of freshness into a phone or a PC.

But what of the middle path? Is it possible to produce simple, well-made phones and fridges that don’t rely on massive marketing hype or the creativity of the usual suspects? Perhaps Muji can pull off the trick. Its expanding ‘no brand’ range, shown for the first time in Milan, now extends to a home phone and a CD player, both combining extreme simplicity with real character.

Trophyism is against Muji’s rules. ‘Muji is about shared universality not individual ego,’ I was told. Very admirable, but, according to the PR lady, anonymity has its drawbacks. ‘It’s difficult to get people interested when we can’t say who designed what,’ she says. So, confidentially, the new phone is by ex-Ideo man Sam Hecht, the CD player is by Naoto Fukusawa and the tables and chairs are by Enzo Mari. But you didn’t hear it from me.

The fine art of partnership