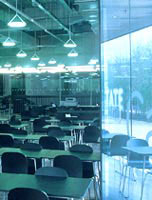 Designer Jasper Morrison was responsible for creating functional furniture that matched Tate Modern’s colossal structure, designed by Swiss architect Herzog de Meuron. ‘Trying to strike the right feel, while finding chairs and tables that stack well and could be removed quickly by trolleys, was a major ingredient,’ Morrison explains.

The Tate Modern cafÃ© features floor-to-ceiling glass windows with Wolff Olins’ superimposed graphics, exposed steel ceiling work, stainless steel lighting, oak veneer counters and tables surrounded by plywood chairs, produced by furniture manufacturer Cappellini. All the elements have been conceived so they would blend effortlessly into the industrial environment of the Turbine Hall.

Upstairs in the grander seventh floor restaurant, Morrison’s plywood Tate chair is covered in black leather. Here, solid wooden counters and stackable tables with removable tops emphasise the functional considerations of his designs, while retaining a slick look. ‘The whole concept of the cafÃ©s is that they should be inexpensive and available to all,’ says Morrison. Along one wall, British artist Hamish Fulton’s graphic scene makes references to urban life, but the spectacular city views outside speak for themselves.

For the members’ room, Morrison lined a wall with ‘the longest sofas in the world’. Measuring 25m, Morrison says that they are designed so visitors can enjoy the views in a club-like environment. Alongside his trademark Elan sofas are white detachable tray tables, designed for Italian manufacturer Alessi, and a collection of Low Pad chairs, inspired by the soles of his girlfriend’s loafers.