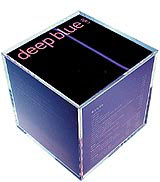 The Wellcome Wing team identified the need for a cafÃ© on the ground floor ‘because by the time you’ve made it through the old museum, you’re in need of a coffee’, says Michael Johnson, partner at design consultancy Johnson Banks, who created the graphics and also the branding on the Deep Blue products (beers, plates and T-shirts).

The cafÃ© is part of the whole experience of the Wellcome Wing, which is conceived as a theatre of contemporary science, while also providing a common language between visitors sitting at the illuminated tables and the exhibits which surround them.

The cafÃ© interior is a powerful medley of blinking graphics and pulsating signs. Johnson, who worked alongside DHA Lighting Design, explains: ‘The space is quite dark, so illumination is critical to the whole wing.’

Architect Wilkinson Eyre, which oversaw the interiors of the cafÃ©, dropped a string of neons from a 8m-high ceiling to create a level of intimacy. Working alongside MacCormac Jamieson Prichard, architect of the Wellcome Wing, it designed self-illuminated tables and Corian benches linking up with the futuristic theme of the wing. Tim McDowell, project architect at Wikinson Eyre, explains his intent: ‘The wing is a forum for science, and we wanted those eating in the cafÃ© to feel part of that audience.’