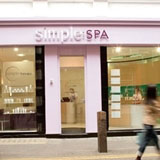 Health and beauty brand Simple is launching a flagship spa centre in London with branding and packaging designed by BR&Me and an interiors concept by Redjacket.

With an initial investment of £750 000, Simple Spa represents a major brand extension for Accantia, Simple’s parent company, which has not previously run a retail operation. It is hoping to tap in to the £1.5bn health and beauty spa market and plans to roll out up to 30 spa centres nationwide in the ‘medium term’, according to Accantia marketing controller Tenley Soanes, who is spearheading the project.

The first Simple Spa opens in Covent Garden in London this Friday, with an interior concept drawn up by Redjacket and Soanes. A 26-strong product range called Simple Therapy is being introduced for the spa, with a premium pack design by BR&Me. The range includes cleansers, toners, masks, moisturisers, eye creams and massage oils.

According to BR&Me partner Elsa Tye, the new range has been developed specifically for professional use in the spa and will not be available in shops. ‘The packaging design represents the next generation of Simple products. They have taken the brand and expertise and extended it into a professional range,’ says Tye.

The day spa will offer five treatment rooms and services ranging from ‘mini facials to luxurious body treatments’. Accantia is hoping to build on the Simple ‘brand promise’, which offers perfume and colour-free soap and cleansing products for people with sensitive skin. Its primary audience is women over the age of 28 who are either current spa users, or who have been nervous of visiting a spa because of their sensitive skin, says Soanes.

‘Moving into retail is a difficult bridge to cross for any packaged goods owner, but it’s particularly rare in our sector,’ says an Accantia spokeswoman.