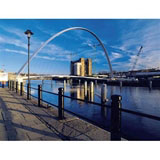 Design’s compass is swinging pointedly towards the North East of England at present, as a number of initiatives start to converge on a 2007 launch.

Chief among these is the establishment of the Design Centre for the North, a purpose-built venue in Gateshead that aims to stimulate innovation through design, science and technology. It is scheduled for completion next year, under a five-storey ‘drum’ architectural blueprint by Newcastle consultancy Red Box Design.

Development organisation The Northern Way is intending to spend £6m on the centre, according to figures in its first annual report, published earlier this month. It is possible that the centre’s activities will dovetail with One North East’s existing service design programme, the Design Innovation Education Centre – a two-year-old project currently in development, but still without a physical home.

A spokesman for One North East declines to comment on the future relationship between the service design scheme and the Design Centre for the North, but DIEC is set to move into its next phase, where prototype service design projects will move from testing and into wider development. It is thought that One North East is considering handing over the programme to an external organisation or consultancy.

‘The Regional Development Agencies are not design consultancies; they are there to develop thinking, strategies and methodologies and to test them, so although nothing has been decided, we would welcome potential partners,’ says DIEC project director Robin Mackie.

One North East programme manager Claire Byers is currently compiling a roster of specialist service and ‘transformation’ designers to work on public and private sector projects for up to four years (DW 17 August). Building on the DIEC projects, Byers says the roster will use design as a transformational tool to improve the service of public and private organisations.

She hopes the roster will allow a ‘rapid response to proposals’ and broaden access to ‘credible, high quality design providers’ across the region, although a specific budget for the projects has not been set. She declines to comment on whether the DIEC programme will be restructured and brought together with plans for the Design Centre for the North.

The launch of the Design Centre for the North comes as the North East region plays host to Designs of the Time (Dott 07), the first in a series of ten-year biennial events proposed by the Design Council. One North East chief executive Alan Clarke says that there is a ‘vision that North East England will establish itself as an internationally renowned design destination’.

Clarke’s objective follows 20 years of redevelopment and transformation around the Newcastle and Gateshead Quayside area. It is already home to the Baltic Centre for Contemporary Art, the Foster and Partners-designed Sage Gateshead arts centre and the Gateshead Millennium Bridge, designed by Gifford and Partners with Wilkinson Eyre.

DESIGN IN THE NORTH EAST:

Design Centre for the North: £6m earmarked by The Northern Way – a coalition of One North East, Yorkshire Forward and Northwest Regional Development Agency; design by Red Box Design

Service and transformation design: One North East is compiling a roster of specialists and Design Innovation Education Centre moves into next phase