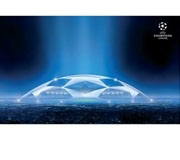 Uefa is updating its Champions League brand identity with a creative concept designed by English & Pockett.

The identity features images of a conceptual stadium which, according to English & Pockett creative director Michael Berthon, forms the ‘top umbrella creative concept’. It is based on the idea of positioning the competition as the ‘ultimate stage’ for football.

The revamped identity will be implemented across a wide range of print- and screen-based applications, including title sequences and promotional kits for use by broadcasters and sponsors. Uefa will use the creative concept for the forthcoming three seasons.

English & Pockett has a long-standing relationship with the football organisation. The consultancy last rebranded the Uefa Champions League identity in 2003. It first started working on this project in November 2004.

The identity is being formally unveiled tomorrow at the first round draw in Monaco. The sequences will be aired next month.

Graphics by Silk Pearce set the scene for The Poetry Trust