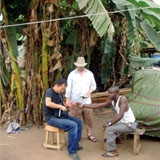 Ethical trade is an issue on everyone’s lips at the moment, but how many organisations are actually making a genuine effort to improve the lives of workers in developing countries, and how many are simply following protectionist policies, appropriating the jargon and styling to deceive consumers? Liz Farrelly takes a closer look

Everyone’s at it, from high street retailers to, it would seem, Hollywood A-listers Angelina Jolie and Brad Pitt. Besides their baby born in Namibia earlier this year, Brangelina’s other joint venture is a range of African homeware products. According to the press release, ‘The couple are working with local craftsmen in Namibia to create an assortment of rugs, pottery and household items to be launched at an art fair in Paris this September. It combines their two passions, Brad’s involvement with design and Angelina’s commitment to humanitarian work. All proceeds from the collection will be donated to a local Namibian community.’

Whatever you think of celebrity endorsements (file between ‘heart in the right place’ charity and ‘cashing in on curiosity value’ opportunism), working with craftspeople in developing countries sounds like a good idea. Traidcraft, ‘the UK’s leading organisation dedicated to fighting poverty through trade’, has been at it since 1979. The problem is, you’d be hard pressed to find a Traidcraft product that goes beyond the ‘sandals and brown rice’ aesthetic.

We’re familiar with retailers of homewares, from the Conran Shop and Habitat to the Pier and the Oxfam Shop, stocking products that result from collaborations between Western and Northern hemisphere designers, specifiers and buyers, and Southern and Eastern hemisphere makers and suppliers. ‘In the 21st century, a Chinese toolmaker, a Vietnamese ceramicist or an Indian basket weaver are as fundamental to our product ranges as contemporary furniture designers. That is what makes Habitat unique,’ proclaims the retailer’s creative director Tom Dixon on Habitat’s website.

In our truly global high street, where fashion and food lead, homewares follow. We’ve seen major players in apparel and sportswear exposed for using unscrupulous subcontractors who were guilty of using child labour or even forced labour, paying ridiculously low wages, forcing employees to work in hazardous conditions and long working hours, as well as union busting, while the household brands they supplied turned a blind eye. Then there’s the discrepancy between wages paid, the cost of production and the final retail price, which allows a string of middlemen to make a big profit. Nike, The Gap and Marks & Spencer have all been held to account, subjected to consumer boycotts and made some sort of amends.

Needless to say, none of the above is ‘good practice’; the official definition of which is on Traidcraft’s website and known as the Ethical Trading Initiative. The ETI is a partnership between high street companies, non-governmental organisations, trade unions and the Government, which aims ‘to ensure that internationally recognised labour standards, in particular fundamental human rights in the workplace, are observed at all stages in the production of high street goods sold in the UK’. And it’s enforceable under international law. 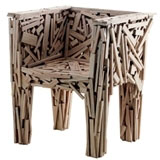 Joan Farrer, senior research fellow at the Royal College of Art, ran her own fashion-textiles company for more than a decade and started research into ethical trade while at Central St Martins College of Art and Design’s influential School of Fashion. An outspoken advocate of a truly pragmatic approach to solving the global inequalities of manufacturing and trade, she describes the ETI’s voluntary code as no more than ‘a sticking plaster on an arterial wound’. For Farrer, the real problem is accountability and the practice of ‘submarining’, where offshore companies operate myriad subcontracting factories in free-trade zones, unprotected by any treaties. When these manufacturers decide to relocate, whether their factories are in South America, North Africa or South East Asia, the entire infrastructure of the surrounding community is devastated.

Looking beyond the recommendations of the ETI, Farrer’s real-world research points to both patronising and protectionist attitudes. ‘If a child is learning its craft at its father’s knee and we say “no child labour” that’s very arrogant,’ she explains. ‘Also, if a country can’t produce the relevant statistics, it won’t be allowed to trade with Europe; we’re putting up what are, in effect, trade barriers around the First World.’ Her criticism doesn’t stop there – she believes the UK’s high street charities are guilty of selling donated clothing to poorer counties, thereby ‘eroding local manufacturing’.

‘We need transparent, vertical supply chains; we need to know the real cost – air freight, carbon debt, ruined water tables – of what is made overseas, and we need a 20-year plan of investment wherever we manufacture,’ says Farrer. On the bright side, her research students constitute a growing community of designers who are issue-led, rather than simply interested in deadlines and cost.

Another RCA initiative saw two groups of students on the Design Products course, plus tutors Martino Gamper and Tom Dixon (wearing another hat), travel to Jaipur in India and Lagos in Nigeria to answer the challenge of ‘Can you have an immediate, measurable impact on people’s lives through design?’. After exploring the markets for raw and recycled materials, the students worked with blacksmiths, welders and concrete casters, making products for export and the local market (such as an irrigating wheelbarrow and a super-broom for sweeping motorways).

Hoping to repeat the experiment on an annual basis, with the help of the British Council and local designers and colleges, Gamper came to the conclusion that to work in developing countries, ‘you need a local partner, who knows the language and materials’. Plus, here comes that word again, he adds, ‘the process needs to be totally transparent’.

In the UK, Hackney’s Hidden Arts organisation has launched an initiative, Routes to Market, bringing together designers, manufacturers and advisors from UBS Investment Bank (as part of its Corporate Responsibility Programme). With a business plan and a showcase at this year’s Milan Furniture Fair, thanks to Routes to Market, designer Ryan Frank’s Inkuku chair has been spotted by Italian furniture manufacturer Edra, which is keen to manufacture it. A white South African who relocated to east London, Frank based his chair on the township craft of using discarded plastic bags to make, most famously, toy chickens (hence the name: ‘inkuku’ is Zulu for chicken). Travelling to Africa, Frank met with the makers of the chickens, ‘a fair-trade co-operative of freelances’, who he hopes will make his chair. 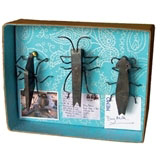 It’s significant that Edra is part of the mix, as it brought the headline-grabbing Favela chair to market back in 2003. Designed by the Campana brothers, inspired by the ad-hoc shelters in Brazilian shanty-towns, and made using local Pinus wood, the chairs are, however, made in Italy. The Favela retails at $3200 (£1700); for that money, you could almost buy an entire favela…

In theory, showcasing indigenous skills, using locally sourced raw or recycled materials and redistributing Western wealth to poorer parts of the world, should be a situation to everyone’s advantage. To avoid pitfalls, however, including accusations of exploitation and fakery, best practice requires total transparency of the entire sourcing and manufacturing process. A funky swing-tag featuring an ‘I Made This’ mugshot might help, too.

‘Informally, we try to orient young designers and craftspeople in the ethical issues of exploitation and intellectual property in developing countries. In fact, they tend to be very sensitive – particularly craftspeople – to these issues already and some graduates even feel retrospectively guilty about the history of their discipline. My sense is that there is much more awareness than there used to be.’

Surrealism in the city