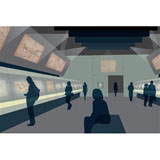 A major exhibition exploring the intricate design processes of Leonardo da Vinci opens at the Victoria & Albert Museum in London next month, bringing together original manuscript drawings for the first time.

Paul Williams, partner at exhibition design consultancy and architect Stanton Williams, has masterminded the design for Leonardo: Experience, Experiment and Design and brought in Cosgrove Hall Films to create a series of animations of Leonardo’s drawings. The exhibition follows hot on the heels of the British Museum’s Metaphor-designed show of the sketches of Leonardo’s Italian Renaissance contemporary, Michelangelo. However, Williams describes the V&A exhibition as ‘a complete foil’ to the Michelangelo presentation, with a very different approach to the design.

Sixty of Leonardo’s drawings will be brought together for the first time and displayed in linear glass planes that will run the length of the 370m2 space, in a design scheme that Williams describes as ‘very pure’. It will incorporate the computer graphic animations created by Cosgrove Hall, which are being produced with the V&A’s in-house design team.

The exhibition focuses on how Leonardo used paper-based drawings to work through scientific and artistic processes, tackling subjects as diverse as a flying machine, the motion of water and the significance of mathematical proportions in the universe. Williams built the exhibition around the notion of releasing Leonardo’s ideas from the manuscripts. ‘The concept is about considering these drawings as captured thoughts on paper. So I thought about releasing the thoughts into animations, which are then ultimately “captured” in the drawings,’ he says.

Light balance is of primary importance in the design. According to Williams, it is vital that the animations do not eclipse Leonardo’s original drawings, which themselves have to be presented under a low light due to their fragility. ‘We explored the idea of plasma screens [for the animations] but decided on projections as they are softer and more ethereal. Overall, the light balance has to be in harmony and we are still working on this,’ says Williams.

Exhibition graphics are by Society Graphic, which was appointed without a pitch six months ago. This is the first time the consultancy has worked with the V&A and it is also its first major exhibition graphics project. Along with a gallery guide, the consultancy has designed labelling systems, environmental graphics and large panels that surround the room, featuring quotes from Leonardo.

‘The exhibition design is very pure and we wanted to retain that purity and let the work speak for itself. The typography is early Venetian [in style] and quite sensitive and considered,’ says Society Graphic creative director Chris Kelly.

Divided into four sections – The Mind’s Eye, The Lesser and Greater Worlds, Making Things and Force – the exhibition will explore the entire range of Leonardo’s thinking, which spanned biology, physics, mathematics, music, design and art. Exhibition curator professor Martin Kemp says that the manuscripts ‘have no parallel in any period’ and were used by Leonardo ‘not as workings for finished paintings but as a vehicle to understand the world around him’.

• Concept and exhibition design by Paul Williams at Stanton Williams

Latest book from 26 designed by Gray 318