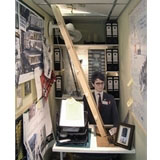 Best in Show is the last of the Architecture Foundation’s Renegade City series, which has sought to explore ‘alternative experiences of architecture and urban spaces’. It originates with the novel idea of having two MA students from the curating course at Goldsmiths College select postgraduate work from the numerous end-of-year exhibitions.

It therefore brings together two tendencies: the rise of the curator as a creative auteur in conceptual art and the ongoing strain of highly conceptualised work being produced in the architecture schools. The question is whether this crossing over of disciplines adds anything fresh.

Unsurprisingly, and, perhaps, disappointingly, the curators have chosen works that closely resemble conceptual art. There is a strong surrealist influence made manifest in spooky Photoshop renderings (Joerg Majer’s G.u.l.l.i.v.e.r.) and a marvellous haunted house-cum- dressing table (The House of Obstacles and Invitations). Tomas Klassnik has an early stab at developing a personality cult in his Desktopolis project, while Aleks Catina’s child-centred urban project, based on the story of a hidden river, is one of the few projects that offers the possibility of an application outside of the gallery space.

All of the works are intriguing, though some achieve the stated aim of communication with the audience better than others. But it is difficult to perceive the curators’ signature and to escape the impression of an architecture end-of-year show. But maybe that’s as it should be.

Sean Griffiths is a partner at Fat

Judging books by their covers