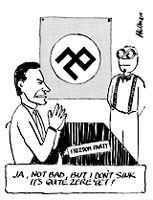 “I’m running a brand, not a democracy”, was the blunt explanation given by the chief executive of a pan-European company, just before railroading his colleagues’ opinions. While listening to the various comments and perspectives, he realised he couldn’t accommodate the recommendations without seriously compromising the design project in hand.

It was a harsh reminder that the greatest or strongest brands are, as he later put it to me, run by fascists. Although not a very PC descriptor, I’m beginning to share his viewpoint.

Ask someone to name a great brand and the usual suspects roll off the tongue – Virgin, Microsoft, Benetton or The Body Shop, for example. Why not the large and powerful Unilever’s, McVitie’s and Rover’s of this world? The irony is that while the former espouse the commendable virtues of democracy, good will and altruism, don’t be duped, they are ruled by single-minded, authoritarian visionaries. But, hey, Anita Roddick et al are in good company – apparently Mother Theresa was a leading exponent of “individual rule” and it didn’t do her profile any harm! Meanwhile, it’s the Unilever’s and McVitie’s of business which are more democratically ruled, to the point where it seems to have saturated their impact.

So what characterises the likes of Microsoft and co? Quite apart from the fact that they tend to have a crystal clear raison d’Ãªtre, it seems that typically they are all brands which are essentially borne out of the passions or beliefs of an individual. Totally compelling and, most importantly, with an unbending attitude towards what they do. You sense this then enables decisions to be taken without calling on the internal committee and, while they may evolve, they never have to soul-search or reinvent themselves. These brands would lose their edge completely if asked to exist under rule consensus.

Can you imagine the “Stolen from Virgin” statement which appears on the bottom of airline salt and pepper pots emerging from a democratic taskforce? The debate would follow the lines of it doesn’t really work if they’re not stolenÃ­ or does it imply that our passengers have criminal tendencies?Ã­ Oh, you can hear the ludicrous logical debates already and guess what? The idea would never see the light of day.

Ditto Ben and Jerry’s Phishfood ice cream which everyone seems to be raving about. You have to question if a brand like Walls (which I would dub a democrat) could have ever delivered an equally idiosyncratic variant (or identity for that matter)? You’d be lucky to get Yummy BananaÃ­ after eight months of stakeholder interviews.

As businesses have become bigger and more sophisticated, we have seen democracy gradually driving out the fascistic approach. Passion and personal beliefs have had to make way for teams trying to guess what the masses will like (while keeping each other placated in the process). The design by committee irritant with which we are all familiar now runs into almost every aspect of business life.

I do sense a certain unease brewing. What’s the point of an ambitious person working in a democracy if they cannot really affect change?

We’re probably all aware of senior clients embarking on new entrepreneurial ventures having realised it is impossible to achieve what they want within the confines of a democratic business. Many e-commerce brands have the hallmarks of “brand fascism” about them. Just look at the boo.com ad where a man vomits in a bin.

While I’m not seriously advocating a fascist approach to running businesses, you have to ask if a single-minded approach would benefit the way in which we create brands. Yes, the democratic style is certainly attractive – it listens and involves. Great for individuals in terms of training and development, and great for the business in terms of providing stability. But problems occur when it is used to block decisions, or to veto prickly issues. As we know, the result is usually a compromised or flaccid brand. Conceived out of need, not passion. Designed to be palatable, not edgy.

As my client demonstrated, we shouldn’t shy away from taking a decisive stance at times – people sometimes need direction as much as they need their own space. Further, we could do worse than instil the importance of an unfaltering set of principles in our businesses. People need to know what you stand for, and furthermore we shouldn’t confuse doggedness, determination and resolve with being difficult!

Whatever your inclinations, I suppose it has to be said that at the end of the day a good place to work is not always the place that does good work. And unlike real fascist regimes, we at least have a choice.