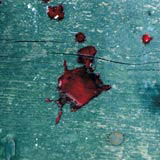 Gordon MacDonald started as a press photographer at the Old Bailey. He would take photographs of murderers either arriving or leaving the trial. ‘That’s when I understood that photography is a weapon,’ he says. ‘You can make someone look either devious or pathetic.’ Yet, when they asked him to start taking pictures of the victims of court trials, he decided it was time to call it a day.

Since then, he has taken a degree in photography, tried editorial work for magazines like Time Out, decided he didn’t like it and turned towards personal projects. In 1999, he participated in Substance, an exhibition curated by Rankin, where he explored in detail common body sores and minor allergies, which he catalogued with ironic titles. Nike Air classics was the name given to a close-up shot of athlete’s foot, while a cold sore was dubbed New Year’s Eve. Rankin has high praise for MacDonald. ‘He really is exceptional. His ideas are good, have depth and are strong. They mean something to me.’ Other projects include ‘Thinking with fists’, six large-scale photographs depicting male fists in relaxed poses and ‘Blood on the streets’, images showing trails of blood left by weekend fights.

The best man for the job isn’t always a man