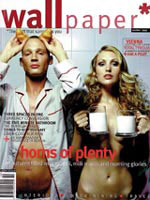 In his early 30s, Baldauf trained as a textile designer, then worked as a graphic designer for six years. Two years ago he turned to photography. Herbert Winkler defines his style as ‘very clean, very funny’.

Part of editor Tyler BrÃ»lÃ©’s cosmopolitan stable of contributors, he has also, in the past few months, shot the billboard campaign for Selfridges, the recent Dutch Mexx fragrance campaign and the Margaret Astor cosmetics campaign in Germany. He prefers to work with undiscovered models and his light-hearted approach reflects a peculiarly ‘German’ sense of humour. He is currently shooting Wallpaper’s next cover.